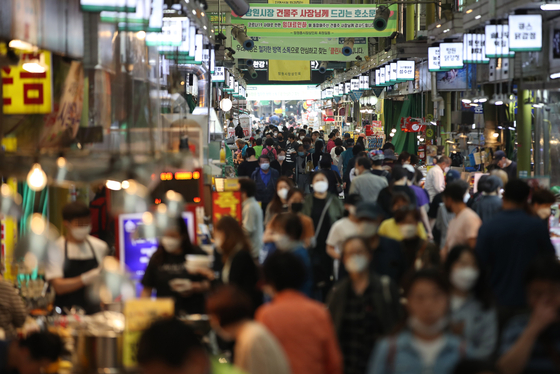 Customers crowd the Mangwon Traditional Market in western Seoul on Tuesday. Spending at such small businesses and markets has increased thanks to government emergency relief grants that were paid starting May 13. [YONHAP]

Economic confidence crippled by the coronavirus is rebounding, and the government claims its emergency relief grants played a big role by increasing spending at small businesses.


According to the Bank of Korea on Tuesday, consumer confidence for this month rose 6.8 points compared to last month’s, to 77.6.

Although the reading continued to be below 100, which indicates that most people are still pessimistic about the economy, last month’s consumer confidence reading was the lowest since the global financial meltdown more than a decade ago.

It was the first time since February that the consumer confidence index went up.

The index fell sharply in March when confirmed cases of Covid-19 surged. 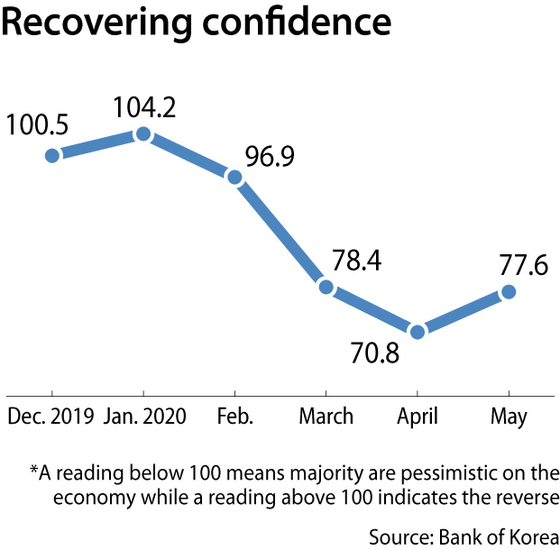 “With the swift delivery of the emergency disaster relief grants, consumer sentiment that was frozen due to Covid-19 has improved,” Sohn said during a government meeting discussing financial market risks on Tuesday.

Relief grants up to 1 million won ($800) per household started being paid on May 13.

President Moon Jae-in praised the effect the grants have had on small businesses.

“I read [news] reports that the emergency relief grants were used [by one family] to buy beef, which [for the family] was rare, and that [a husband] finally bought a pair of glasses for his wife,” Moon said during a cabinet meeting on Tuesday.

“In particular, sales of hanwoo [Korean beef] and samgyeopsal [pork belly] have surged,” he said, adding that sales declines at small businesses have slowed while credit card spending has recovered to last year’s level.

The good news on the confidence index was noted by stock punters.

Korea's main bourse, the Kospi, returned above the 2,000 level for the first time in more than two months on Tuesday.

The Kospi has been on a winning streak lately, although last Friday it lost 28.18 points, or 1.42 percent.

If confidence bumped up a bit, economic forecasts are only getting gloomier.

The state-owned Korea Development Bank last week revised its economic outlook for this year from 2.3 percent to 0.2 percent, the slowest growth in 20 years.

The KDI cited contracted consumer spending and exports as the reasons for its gloom.

Yet many companies remain pessimistic.

According to a Korea Economic Research Institute (KERI) survey of Korea's top 600 companies by revenue, the business confidence level for June was 68.9.

While this was 7.1 points higher than last month's 61.8, most of the companies were pessimistic.

Manufacturers were the most pessimistic with confidence among automotive companies at 42.1.

However, June’s business sentiment was up only 9.6 points from a low of 59.3 in April.

“It has become difficult to predict when the economy will recover,” said Choo Kwang-ho, head of the economic policy team at KERI. “Aggressive liquidity measures such as simplifying the process for financial aid so that companies could dodge the economic impact is needed.”