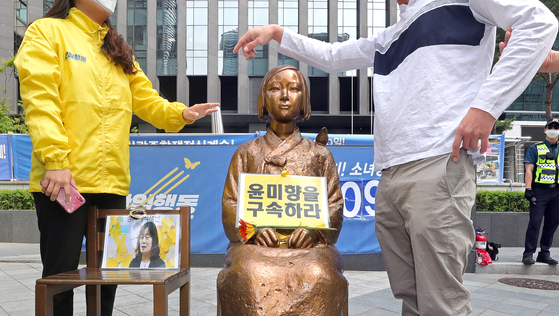 A statue symbolizing victims of Japanese wartime sexual slavery in Jongno District, central Seoul, on Monday is seen with a sign calling for the imprisonment of lawmaker-elect Yoon Mee-hyang, who has been questioned over her financial transparency by Lee Yong-soo, a "comfort woman" survivor. Two youth groups clashed over the placement of the sign that day. [YONHAP]

Yoon's order follows allegations that the Korean Council for Justice and Remembrance for the Issues of Military Sexual Slavery by Japan exploited the survivors and misappropriated funds. He noted that the group has received government subsidies, and told prosecutors to “examine all allegations raised in the media” against the civic group, the JoongAng Ilbo reported Tuesday.

The Supreme Prosecutors' Office is supporting the ongoing efforts of the Seoul Western District Prosecutors’ Office, which is in charge of the legwork of the investigation.

The Korean Council, which has since 1990 advocated for victims of the Japanese military’s sexual slavery before and during World War II since 1990, has been accused of misusing donations and government subsidies and questionable accounting practices.

The former head of the group, lawmaker-elect Yoon Mee-hyang, has also been questioned over other irregularities, including the council’s purchase of a house in Anseong, Gyeonggi, meant to be used as a healing center for the so-called “comfort women” victims.

The house was purchased in September 2013 for 750 million won ($607,000) and was sold last month at a much lower price than it was initially purchased for. The group also allegedly used the house, which has been managed by Yoon's father, for purposes outside its intended use.

Yoon, who has denied the allegations against her, has also been accused of collecting donations in her personal bank accounts.

The allegations, in the form of news reports and civil complaints filed against the Korean Council, followed an explosive May 7 press conference by Lee Yong-soo, a comfort woman survivor who questioned the integrity and financial transparency of the civic group and its former head. In a second press conference Monday, Lee again expressed grief over having been “used” by the Korean Council for the past 30 years and said that she believes prosecutors will reveal whether Yoon committed any crimes, and punish her if she did. 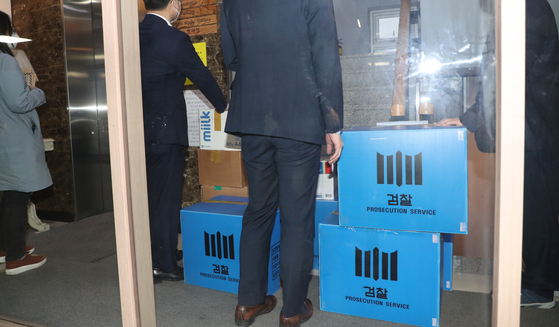 Prosecutors conduct a raid of the Korean Council for Justice and Remembrance for the Issues of Military Sexual Slavery by Japan's office in Mapo District, western Seoul, on May 21. [YONHAP]

Last week, the district prosecutors’ office raided the Korean Council’s offices in Mapo District, western Seoul, as well as a residence for the victims and other related facilities on May 20 and 21, confiscating documents and searching for evidence of misappropriation of donations and accounting fraud.

Prosecutors are reportedly tracing Yoon’s personal back accounts, including her KB Kookmin Bank account. The investigation could also be expanded to include the bank accounts of other figures close to Yoon. Prosecutors also are considering dispatching an investigator specializing in accounting sometime this week.

Yoon, who was elected last month, is set to begin her term as a proportional lawmaker for the ruling Democratic Party (DP) when the new National Assembly session begins Saturday.

Investigators appear to be moving quickly ahead of that date, as Yoon's status as a sitting lawmaker would provide her with immunity against being arrested, making it more difficult for them to summon her if needed.

Prosecutor General Yoon’s involvement in the case is seen as reflecting the seriousness of the potential criminal charges and also may signal that the scale of the probe could widen.

But legal experts have indicated that lawmaker-elect Yoon taking office later this week is unlikely to have had a major impact on the prosecutor general’s order. The probe and analysis of the documents and evidence should require more than four days, and the Korean Council has been cooperative with the investigation. Likewise, there is the possibility that Yoon Mee-hyang could voluntarily comply with prosecutors’ summons if needed.

Yoon has said she has no plans to step down as a proportional representative. She has kept a low public profile in recent days, and declined an invitation from Lee Yong-soo to appear at a second press conference held Monday.

The Munhwa Ilbo reported Tuesday that prosecutors decided to summon Yoon as a suspect amid an investigation into the Korean Council’s alleged accounting fraud and misappropriation of donations. According to prosecution sources, investigators are also considering questioning Lee, who first accused Yoon of misusing Korean Council funds.

The main opposition United Future Party (UFP) on Monday held its first task force meeting as it separately investigates the allegations against the Korean Council. The party has called for Yoon to step down as a proportional representative.

Ruling Democratic Party spokesman Kang Hoon-sik said Monday the DP will await the result of the prosecution's investigations and stressed that “revealing the truth is the priority” regarding Lee’s accusations in her second press conference. He added that the Korean Council must actively work to resolve the issues raised by Lee, while saying the controversy“should not overshadow the rights activities and history."

However, DP Rep. Kang Chang-il told MBC radio on Tuesday that separate from any prosecutor investigation, Yoon should also “apologize for creating such an uproar.”

Kang said, “As a lawmaker and politician, she has to state her position on the issues raised by [Lee] and explain things that have to be explained.”