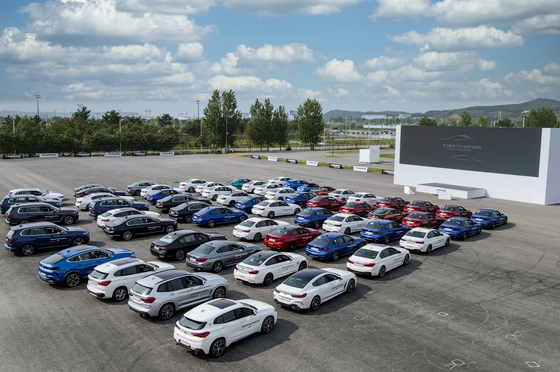 BMW Korea held the world premiere of its new 5 and 6 Series at its driving center in Yeongjong Island, Incheon, on Wednesday. [BMW KOREA]

YEONGJONG ISLAND, Incheon — Temperatures were strictly checked and face masks mandatory at the BMW Driving Center in Yeongjong Island in Incheon, where the German carmaker held the world premiere of its face-lifted 5 and 6 Series models on Wednesday.

It was the first time the world premiere of an imported car was ever held in Korea — not to mention of two different models.

Sixty BMW vehicles were lined up at the center's drive training course, and the safety-screened reporters got into their own designated cars to watch a presentation on a stage. A sign reading "sanitization complete" hung from every car's rear-view mirror.

Speeches and the audio for a video presentation could be heard via a pre-set frequency on the cars' radios. It was reminiscent of a drive-in theater — with no need to roll down the window.

This is how cars are introduced to the world during a pandemic. 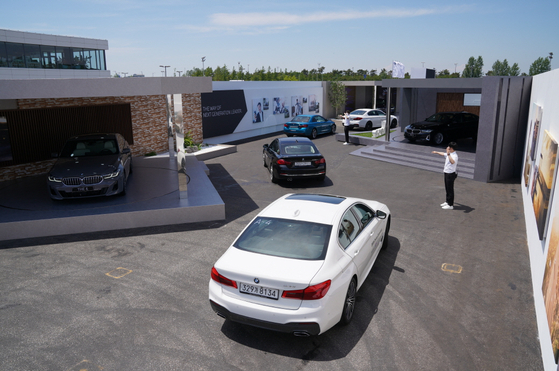 Reporters drove a BMW vehicle through a temporary structure set up in the middle of a racing track at a speed of 10 km/h where the facelifted 5 and 6 Series models were on display. [BMW KOREA]

The actual unveiling of the new models was also done in a drive-through method. Reporters drove into a temporary structure set up in the middle of a racing track at a speed slower than 10 kilometers (6.2 miles) per hour where the new 523d, 530e and 640i xDrive were on display. A hands-on experience was made available later on.

It was the German luxury automaker's first offline marketing event since the coronavirus swept the world. BMW chose to introduce the partially revamped 5 Series and 6 Series in Korea because it has been one of the biggest markets for the two models. Its globally acclaimed handling of the virus was also a factor.

Korea was the biggest market for the previous version of the 5 Series, which launched here in 2017, selling an accumulated 72,000 units. For the 6 Series, also, Korea is the No. 2 market.

The revamped models were originally planned to come to Korea through the Busan Motor Show in May, but the international event was canceled due to the coronavirus.

“Despite the cancellation of the show, we kept our promise to host the world premiere of the new 5 Series in Korea,” Pieter Nota, board member of BMW AG responsible for sales, said through an online message.

“The fact that we can even host this event today at the driving center, underscores the decisive and comprehensive actions taken by Korea at an early stage to slow the spread of the coronavirus. I greatly respect Korea's exemplary response and hard work to safeguard the public health and well being of the global community."

The exterior of the face-lifted 5 Series has gotten an upgrade, including an enlarged grille in the front. The LED headlights have gotten slimmer, and the rear has been redesigned with a new L-shaped taillight, giving the car an overall sharper demeanor.

A six engine lineup will be offered in Korea for the 5 Series, ranging from a diesel model dubbed the 523d; four gasoline models labeled 520i, 530i, 540i and the more powerful M550i; and a plug-in hybrid version dubbed the 530e.

The 5 Series’ flagship 523d, formerly 520d, has been newly equipped with what’s called mild hybrid technology, which boosts the car's powertrain by 11 horsepower through a 48-volt battery. It doesn’t need to be charged separately but gets its own fuel through regenerative braking.

The plug-in hybrid 530e can drive 62 kilometers purely on its battery.

The face-lifted 6 Series has gotten sportier with a redesigned front and more angular headlamps. It will be offered in three diesel and two petrol engine options.

BMW Korea said the face-lifted models will be available for local customers in the fourth quarter of this year, with the 6 Series expected to come in earlier than the 5 Series.