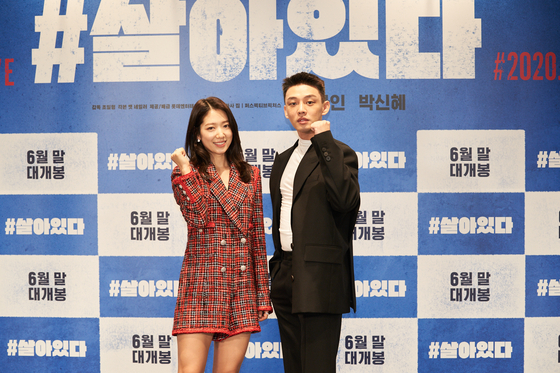 If the the upcoming apocalypse film “#Alive” is anything to go by, the answer is no.

The film centers on the struggle of two protagonists Joon-woo (played by Yoo Ah-in) and Yoo-bin (played by Park Shin-hye) as they find themselves caught in the middle of a mysterious plague that puts people in a trance-like state. While the infected display many of the classic characteristics of zombies, the cast insists that they are most definitely not.

When the plague hits, the two characters become stranded in their respective apartments in the same complex with no means of communication with the rest of the world.

“While there is the kind of entertainment that a disaster thriller offers, our film focuses more on the situation at hand and the relationship between the two characters as they become comrades and partners who put their heads together to escape the apartment complex brimming with infected people,” Yoo said during an online press event on Wednesday.

It seems that the two actors have become comrades in real life as well. The chemistry developed between the pair from working together was evident as they laughed and joked with each other throughout the hour.

“We really became friends as we shared moments [during filming]. I thought I was the only one who felt it, but Yoo felt it too,” Park said. “It wasn’t something that I could ask anyone about, but after sharing it with Yoo I realized that I wasn’t the only one facing such problems, and that itself was a huge consolation. I felt like a part of my identity [that was hidden from everyone] was accepted.”

Director Cho Il-hyung agreed that the two actors perfectly encapsulated the relationship that builds up between the two protagonists in the film. Although the director wasn’t able to attend the press event, he answered questions from the press via email. The director is currently in the United States and wasn’t able to make it back in time for the event due to the ongoing coronavirus pandemic.

“The film is adapted from the script of zombie thriller ‘Alone’ by Matt Naylor, and the part I found most interesting was how the characters, trapped in their homes, would react and deal with the disaster at hand,” Cho said. “Joon-woo and Yoo-bin are two ordinary characters without any superhero powers who use only their wits and ordinary tools [that are lying around their house] to survive without any outsiders’ help."

“There was a kind of catharsis that the film offers as Yoo-bin uses her everyday tools to survive,” Park said. “Tools related to hiking, which is her hobby, become really useful assets for her survival, such as rope, a hatchet and an ice pick. I found it exhilarating to use everyday objects for a whole other purpose [of survival].”

The film also opens the audience's eyes to the fear of losing a home.

“The place remains the same, but it’s no longer a safe place that offers a barrier from the rest of the world, and that really gets into the characters’ minds,” Park said. “Even Yoo-bin, who remains cool-headed and relatively calm in this situation, crumbles when her home is no longer a safe haven from the infected.”

As the characters attempt to escape from their homes, the distinct architecture of Korean apartment complexes is expected to offer another source of entertainment that can exist only in local films.

“It’s very queer — [the corridors] can be considered as to be on the outside but simultaneously an inner structure of a building,” Cho said. “Joon-woo and Yoo-bin find this particular building structure frustrating.”

The film is scheduled to premiere on June 24.