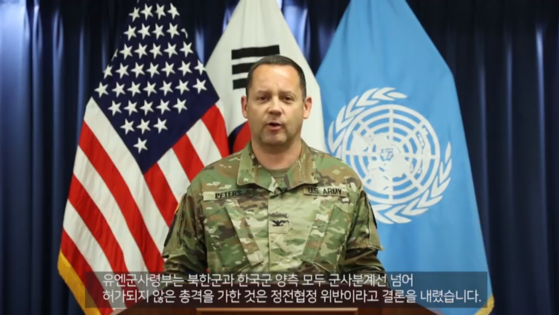 United Nations Command Spokesperson Col. Lee Peters delivers a statement on the results of an investigation of the exchange of gunfire between the two Koreas at the demilitarized zone on May 3. [SCREEN CAPTURE]


The United Nations Command (UNC) on Tuesday said both Koreas violated the armistice agreement with an exchange of gunfire at the border earlier this month, sparking an objection from Seoul.

The UN Command, which oversees compliance with the agreement that halted hostilities in the 1950-53 Korean War, said it could not definitely conclude whether the initial shots from North Korea toward the South on May 3 were accidental or intentional.

Though it condemned the North’s actions as a violation of an inter-Korean military agreement signed in September 2018, Seoul’s Joint Chiefs of Staff later concluded the North’s gunfire was likely a mistake on the part of the northern troops.

Pyongyang did not respond to the South’s request for an apology, and has made no public statement about the matter.

On May 4, the UN Command launched an investigation, which on Tuesday wrapped up with the conclusion that both countries were at fault for opening fire in the DMZ.

North Korea violated the armistice agreement, which forbids all hostilities within the DMZ, by firing four rounds from a 14.5-millimeter small arms. South Korea, however, also violated the agreement by firing back two volleys in response 32 minutes after the initial fire, the UNC said.

A request for clarification of its position was made to the North, but Pyongyang has not issued a formal response, the UNC added.

Article 1 of the armistice agreement — reached between the UNC, North Korea and China, but which South Korea never signed –— stipulates neither side “shall execute any hostile act within, from, or against the demilitarized zone.”

“Our military unit on the ground at the time took the appropriate measures to the North Korean military’s gunfire based on our response manual,” read a ministry statement.

While not the first time the two Koreas engaged in gunfire inside the heavily fortified DMZ, the incident raised tensions on the peninsula amid a protracted lull in negotiations over North Korea’s denuclearization process.

The two Koreas signed a Comprehensive Military Agreement in September 2018 at an inter-Korean summit to address the risks arising from mutual hostility, but Pyongyang later flouted the agreement through multiple weapons tests while criticizing Seoul for toadying to the United States.

South Korea has since been treading a delicate line between maintaining a strong defensive posture in response to the North’s growing antagonism and relaying conciliatory messages to Pyongyang in an effort to revive inter-Korean exchanges.

On Wednesday, South Korean Minister of Unification Kim Yeon-chul visited an estuary of the Han River bordering the North to signal Seoul’s interest in opening up the waterway to joint use between the two countries.

The two countries agreed to joint use of the estuary with their military agreement in September 2018 and even went ahead with combined research at the site, but a breakdown in nuclear talks between Pyongyang and Washington halted the project, along with many others.