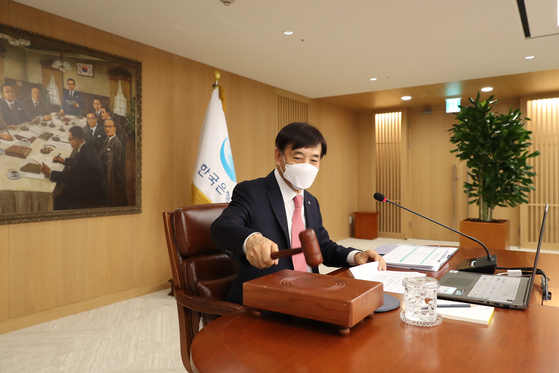 Bank of Korea Gov. Lee Ju-yeol is seen at a monetary policy board meeting on Thursday in which the committee decided to cut interest rates by 25 basis points. [BANK OF KOREA]

The Bank of Korea (BOK) cut the benchmark interest rate by 25 basis points Thursday, bringing it to a historic low of 0.5 percent. The bank also revised the country’s growth outlook to -0.2 percent this year, a shuddering drop from its 2.1 percent growth forecast in February.

"Economic growth in Korea has slowed considerably. Consumption has remained sluggish, and exports have fallen significantly,” the board said in a statement.

“While the recovery in facilities investment has been subdued, the correction in construction investment has continued. Labor market conditions have worsened with a sharp decline in the number of persons employed, especially in the service sector. The board expects that domestic economic growth will remain sluggish for some time due to the impact of the COVID-19 pandemic.”

It is the second time the central bank slashed the rate since the outbreak of the coronavirus. In March, the bank made an emergency cut by 50 basis points to 0.75 percent after the declaration of a pandemic by the World Health Organization.

The market had mixed predictions for Thursday’s monetary policy meeting. Eighteen out of 23 analysts polled by Bloomberg forecast the bank would make an interest rate cut. A Korea Financial Investment Association survey, on the other hand, showed 79 percent of 200 respondents associated with the bond market said the bank would hold rates steady.

The economic fallout from the coronavirus has been heavy as shown in the latest exports figure released by the government. Exports in April dropped by 24.3 percent on-year followed by additional 20.3 percent drop in the first 20 days of May.

A negative growth estimate came as a surprise as the central bank tends to release conservative outlooks compared to other economic institutions.

Bank of Korea Governor Lee Ju-yeol said in April that despite the outbreak, the country would manage to grow at a positive or flat rate this year.
The Korea Development Institute on May 20 forecast that the country will grow at 0.2 percent this year.

Only six out of seven members of the reshuffled Monetary Policy Committee participated in Thursday’s base rate vote as Cho Yoon-je, one of three new members who joined the committee in April, was excluded due to his stock holdings, which exceeded a 30 million won limit set by the Public Service Ethics Act.

The BOK estimated the country's gross domestic product will grow at 3.1 percent in 2021.

Korea’s economy has recorded negative growth in only two years since the bank started to compile data in its current form in 1953. The first time was in 1980, when the country’s economy contracted by 1.6 percent, followed by 1998, when GDP shrunk 5.1 percent.