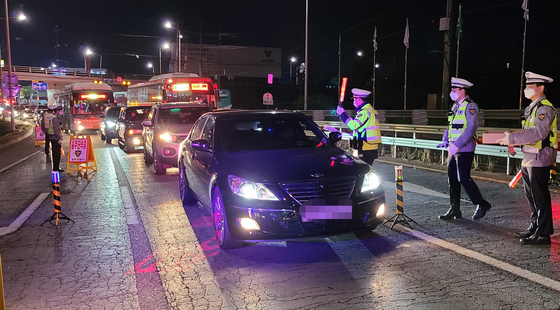 Police officers test the alcohol level of drivers at a three-way intersection in Gwangju, Gyeonggi Province, on April 18. [NEWS1]


Drunk drivers and offenders in hit-and-run accidents may have to pay compensation up to 154 million won ($124,000) starting next month for death and damage they cause on the road.

From October, the maximum will be even greater, up to 165 million won, according to the revised standards for automobile insurance announced by the Financial Supervisory Service (FSS) Wednesday.

Currently, if a driver commits a hit-and-run accident or causes an accident while driving intoxicated, they are only responsible for a maximum of 4 million won of compensation for damages. For those insured, the rest is paid by the insurance company.

However, the government, insurance companies and financial regulators agreed to shift more of the responsibility to the drivers and lifted the maximum amount, with the hopes of decreasing the number of car accidents and cushioning the balance sheets of insurance companies. The revised clause will be applied to drivers who either renewed or newly sign up for car insurance after June 1.

Currently, bodily injury or death caused by drunk drivers and hit-and-run offenders are covered under personal indemnification, for which the maximum liability is limited to three million won. Once the revision goes into effect, offenders will be responsible for up to an additional 100 million won on top of the original three million, if the damage claimed by the victim is over 150 million won.

In Korea, anyone driving with a blood alcohol level above 0.03 percent is considered intoxicated.

Under the Korean law, car owners are required to sign up for bodily injury and property damage liability insurance.

The revision also includes changes for carpooling during commuting hours. From next month, both the driver and passenger can claim compensation from a violator if they are hurt or killed in an accident. This is a big change from the current law, which does not compensate for accidents that occurred against “drivers that have used their vehicle multiple times for commercial purposes”. The revision defines commuting hours as 7 a.m. to 9 a.m. and 6 p.m. to 9 p.m.

However, even if an accident happens during commuting hours, neither party can receive compensation if the passenger got into the car before the designated hours start.