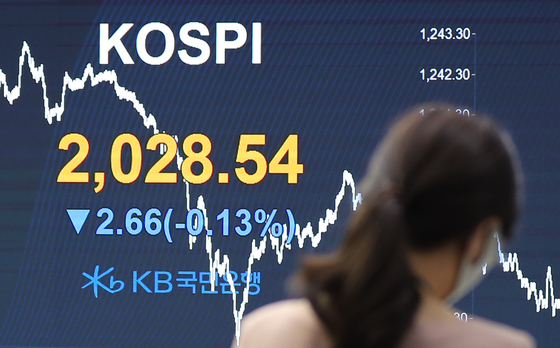 An employee looks at the benchmark Kospi index displayed on the screen attached to the walls of dealing room of KB Kookmin Bank, in the financial district of Yeouido, western Seoul, Thursday.

The escalating Covid-19 woes erased much of the morning gains. The index hit a session-high in the morning, following the Bank of Korea's decision to cut its key interest rate by a quarter percentage point to a record low of 0.50 percent.

The increase is mostly blamed on mass infections at a distribution center in Bucheon, Gyeonggi Province, which is operated by e-commerce giant Coupang, according to the Korea Centers for Disease Control and Prevention (KCDC).