The plates might be small, but the story behind these Spanish bites is not

The plates might be small, but the story behind these Spanish bites is not 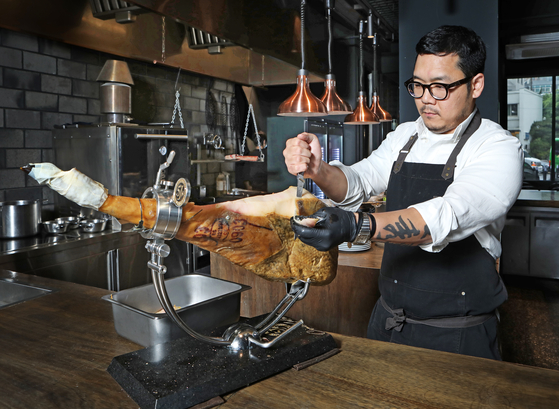 
While the popularity of European cuisine has been growing in recent years, its mainly been French and Italian restaurants that have been reaping the benefits while Spanish food lingers in the shadows.

Chef Shin Seung-hwan is hoping to change that with his restaurant El Txoko de Terreno in Hannam-dong, central Seoul, which has been offering customers small bites that are popular in Barcelona or San Sebastian. Shin opened the more casual spot last year after six years of the running finer style Terreno in Jongno District.

While he likes to stick to the very classic roots that defines certain dishes synonymous with Spain, Shin is not afraid to add not-so classic flavors to enhance the experience and draws on his time abroad to do so. In the past 20 years Shin has lived and worked in Japan, the United States, Dubai, Thailand and Spain, and uses tips, tricks and flavors he gathered to boost his small plates. 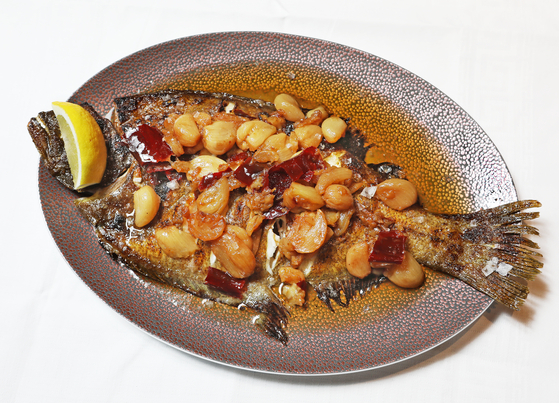 
“Spanish food is still considered something new even though the ingredients that make many Spanish dish include rice and garlic which are also widely used in Korean cuisine,” said chef Shin. “It is just exotic enough, locals can still accept it as something comfortable when eating out.”

When it comes to creating new dishes for the restaurant, it is a short process. When inspiration strikes he creates the dish and casually offers it to customers sitting at the bar. With the feedback he gets, he makes changes and the dish is complete. Shin insists he's always open to taking feedback from customers as he believes taste is subjective and he can't only trust his own palate.

Yet he doesn’t try to follow what’s currently trending in Spain, such as adding wasabi to sauces, because diners in Korea are already familiar with Japanese cuisine, so such a twist isn’t something they want to see when they order Spanish food. However, he does like to incorporate some elements of Korean food such as bamboo and dried peppers but makes sure to not to overpower the Spanish characteristics of his dishes.

“A mix of little things from across my culinary background work to make the dishes I serve feel more comfortable, but there is always a root that I stick to in order for my food to have a strong Spanish base. Things are added to highlight certain elements because I can’t use everything Spanish while I cook Spanish food in Korea.”

One element he insisted on when opening El Txoko de Terreno was cooking with charcoal, a technique he has dreamed of ever since he opened Terreno. Regardless of the dining style, whether fine or casual, Shin had a vision of cooking food over charcoal to cater to customers looking for quick bites of something savory to pair with a glass of wine after work. While the heat and smoke that come with cooking on charcoal created a barrier when it came to choosing a spot to open his new concept, Shin was insistent and remained patient.

“This way of cooking can be considered rough and I like rough,” said the chef, citing that cooking meats and vegetables using charcoal adds a natural element to dishes. "It helps the flavors of ingredients I cook become more concentrated." 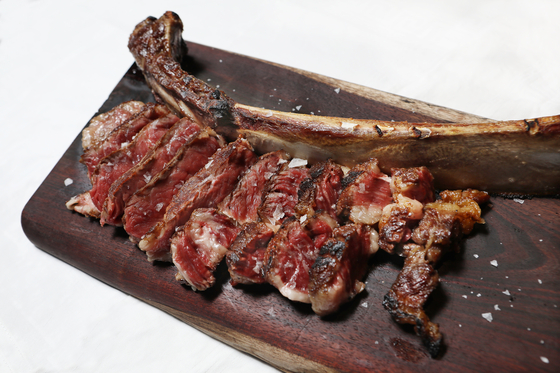 
Shin is all about getting his hands dirty when it comes to the food he serves at his restaurant.

He's been growing his own ingredients at a farm for years in Gongju, South Chungcheong. The farm is about 2,000 square meters and sports a variety of fruits and veggies which he experiments with and serves such as rhubarb and fennel.

“The reason I named my restaurant Terreno is because I wanted to get everything to come directly from the land to the restaurant without passing through any markets,” he said, adding that he also aims to get all the seafood he uses fresh and direct from the fishermen who catch it.

His desire to grow, harvest and use his own produce stems from a goal to build relationships with customers based on the story behind each dish. Even though the ingredients may be accessible, Shin feels the personal touch he adds elevates his food.

“Each vegetable might not be something rare but I try to turn that everyday produce into something rarer by using the raw material to create a dish which has tastes and a story that can't be found anywhere else."

He aims to add his personal touch to ingredients he doesn't source from his farm too. For example, instead of buying commercially available truffle oil, he makes his own to suit his tastes and needs.

“I like ingredients to have a very concentrated taste,” said the chef.

Cooking is not Shin's only passion. Working with centers that provide accommodation and care to orphans is a cause close to Shin as his grandmother used to run a restaurant with a chef who became an orphan due to the Korean War. Since he opened his own restaurant, he has also been trying to include orphans at his work.

“I have worked to support myself from a young age, and I want to tell young people that they can also discover what they want to do with their lives,” he said, adding that he wishes to open a school in the future.