The man with two names who wore many hats 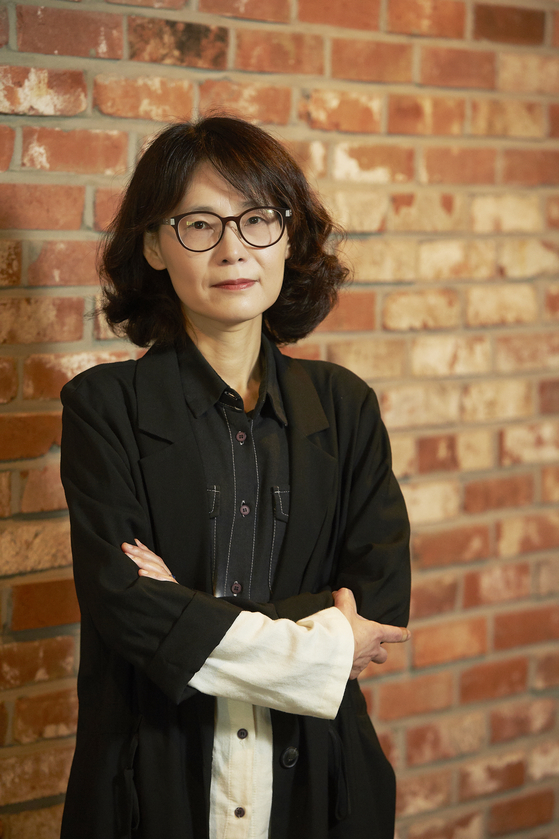 These few words were uttered by Minod Moktan after his final concert with his band members in Nepal.

Describing Moktan in such a succinct manner is not so simple.

He was a first generation migrant worker, a human rights activist, the lead vocalist in a multinational band Stop Crackdown, and a man with a deep love for Korea — a country he yearned to call his home.

Moktan first arrived in Korea in 1992 and lived here for 17 years before he was deported back to Nepal in September 2009 after he was blacklisted by the Lee Myung Bak administration for participating in various protests related to advocating for migrant workers’ rights.

He spent the rest of his life longing for Korea, which he felt was his true motherland.

The name Moktan may not be familiar to many Koreans, but his face is, although that too may be fading from people's memories.

Moktan was once a star in Korea, going by his Korean name, Minu.

A prominent cultural activist who worked tirelessly to advocate laborers' rights, Moktan's band, Stop Crackdown, featured songs that represented the needs of the laborers. Wherever there was an issue regarding migrant workers, it seemed Moktan could be found. 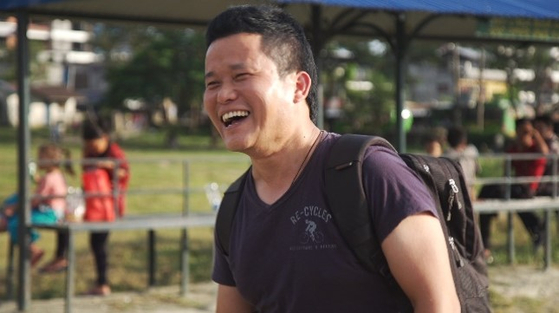 Minod Moktan, or known as Minu in Korea, is a cultural activist who represented the voices of his fellow migrant workers in Korea. [FULL FILM]


When director Jee Hye-won first heard of U.S. President Donald Trump's anti-immigrant policies, which also pose a threat to Korean nationals living in the United States, she was instantly reminded of Moktan.

She decided to reach out to Stop Crackdown band members living in Korea, and after speaking with them decided to fly to Nepal to make a documentary about the man she remembered as Minu.

“Minu was just happy at the fact that there were still people who remembered him,” Jee reminisced during a recent interview with the Korea JoongAng Daily at a café in central Seoul. “Since he was also familiar with the media spotlight, he asked me how I wanted to portray him. And I replied by asking how he would like to be seen.

“He said he didn’t want to be pitied,” the director said.  “After he was deported, he said his Korean friends felt sorry for him. But he wanted to show that he was was doing well in Nepal, he wanted to be seen that way so that his friends won’t have to [feel sorry].”

Jee's documentary, "Free Minu," which centered around Moktan's life in Nepal after being deported and his band's reunion, was the opening film of the 10th DMZ International Documentary Film Festival.

A month after its premiere at the film festival, Moktan died of a heart attack.

Following the death of the subject of her documentary who also became her friend, director Jee reedited the film which was released in theaters nationwide on May 27.

The following are edited excerpts from an interview during which she talked about the revised film and Moktan.


How is this film different from the version shown at the DMZ film fest?
When I first started filming Minu, I was immediately attracted to the person that I met in Nepal rather than what I knew about him from his previous activities and history. I mostly focused on his current life and the process of how the members of his band came together again for a concert. But [after his death] I cut that process out and put more effort into tracking down what Minu did in Korea and how his activism affected his life in Nepal. To put it simply, the first version centered around Minu’s emotions — his nostalgia for Korea and sense of loss when he was deported — but the second version is based on facts.

I can see that Moktan genuinely, wholeheartedly loved Korea. Did you get the chance to ask him why he loved this country so much?
That is the question that I kept asking him [throughout filming], until I could finally understand. It wasn't about how many years he lived in Korea. I came to an acceptance that there were two factors that tremendously affected Minu’s affection for Korea. The first factor was what part of his life he lived in Korea. Minu arrived in Korea when he was 20 years old, when he first started to experience what society is: what it feels like to belong to a part of workforce and to have colleagues and friends. All of these things he learned in Korea and all of his perspectives and ideologies were formed here. When he was telling me about himself, he kept saying, "Although my body may have been born in Nepal, my head was raised in Korea."
Another reason is because of the people. I don’t think there was any foreigner as beloved as Minu. As much as he loved Korea, the people here loved him back. Maybe it was because of his inherent compatibility which allowed him to get along with almost anyone, but it seems that people around him really did dote on him. Rather than missing the country, Minu missed the people, because it was the place where all of his closest lived.

Did he tell you about any negative memories he had from his time in Korea?
When Minu was working here, there wasn't one time that he received a pay check late or encountered any kind of physical violence. He told himself that he was very, very lucky to have always met kind bosses and co-workers, so he’s never been discriminated against or exploited. But when he looked around him, he saw many workers in his position who weren’t treated fairly.

In a way, Moktan missed out on a whole life in Nepal. How did he manage to start again after he was deported?
I think he had the energy to start over again due to the social responsibility he felt. I know that he struggled for a while after he came back to Nepal. But then, he began to see all of these young people going abroad to find jobs. Right now, six out of 10 households in Nepal are dispersed families due to migrant workers. Families are separated, and when these youths come back to Nepal, they can’t adjust to the life here, so they leave again.

It was same for Minu. He told me that if he could have found a job, any job in Nepal, he would have stayed. But there were simply no jobs available, it wasn’t because he was exceptionally poor, or lacked education.

He gave a lot of thought to how he could contribute to his home country after dedicating himself so devotedly to stand up for the rights of foreign workers in Korea. And he came to a conclusion that the least he could do was to create jobs.

In the film, I only show one of his social enterprises, Tripti Coffee, a fair trade café he ran that also trains baristas. But he also co-established ‘Sukhawati Store,’ the equivalent to Korea’s ‘Beautiful Store,’ where the store receives used clothes to resell at low prices. He was also a vice president of the organization ‘Ankur Nepal,’ which supports youth who came back from overseas and helps them settle in Nepal again. 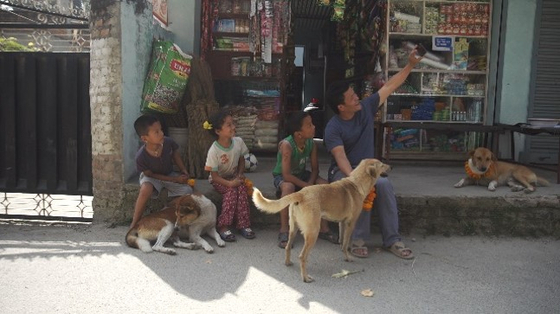 Minu hanging out with town kids in Nepal. [FULL FILM]


Tell us more about the reunion of Moktan's band and the concert they staged. What was it like and how was it planned?
After Minu was deported, the band naturally came to be put on hold as well. But one day the members decided they wanted to hold concerts in their respective countries, like a tour. They initially planned to go on this tour in 2015 but an earthquake in Nepal put their plans on hold. However, nine years after Minu was deported, the band members were finally able to gather together for a concert in 2018.

The concert was a success. It was hosted and promoted by Ankur Nepal, and out of 1,000 seats, about 800 of them were filled, which showed how much Nepalis are interested in Korea.

Minu had also personally translated all the Korean lyrics into Nepali so that the audience could understand the songs. The next day, Minu’s face appeared on a local daily newspaper as “the happiest face of the week.” (laughs) 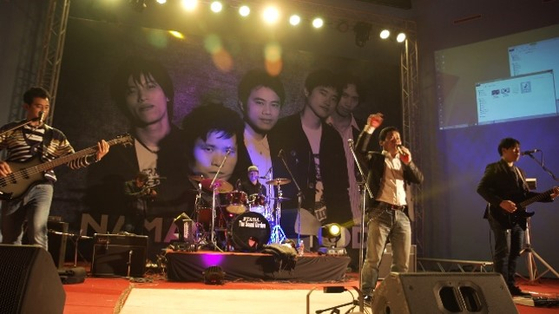 Minu and his band, "Stop Crackdown" get together after nine years to perform in Nepal, Minu's home country. [FULL FILM]


Do you think Moktan would have managed to adjust to Korea now as well as he did when he arrived in 1992?
No. He was very soft-hearted and tender, and he would have had a much harder time here if he came now. One of the things he missed the most about Korea was no matter how late his shift ended, he would go out for drinks with his friends, but then be revitalized to wake up early again the next morning and go to work. He loved that jolly atmosphere. And how town people said hi, smiled, and cared for him as if they he was one of them. The activists that he worked with — he loved their passion. He was the kind of person who was inspired and invigorated by the people around him.

Nowadays, when you look at articles related to migrant workers, malicious comments always follow. One shocking sentence that I remember was ‘Citizens come first before people.’ Nowadays, I believe that people tend to think of everything as a zero sum game. They think that if the workers are let into society, their portion of the pie shrinks. So psychologically, I think that this era has become a more difficult place for workers to live in.

What do you want people to feel after they watch the documentary?
[Before meeting Minu], I wasn’t an activist fighting for migrant workers' rights. I was just someone who made documentary films. But as I became immersed in Minu, I began to study and saw what part these workers played — and are still playing — in the economic advancement of our society.

As people see this film, I want them to go further than just feeling warm about or having sympathy for Minu. If there are any stereotypes, misinformation, or just knowledge that they weren’t aware of, I hope the film makes people want to learn more. Saying that they are to be pitied, or we should all live together in harmony are just sentiments that show that people aren’t aware of how much these workers have become an integral part of our lives, and how much more we’ll be needing them in the future. 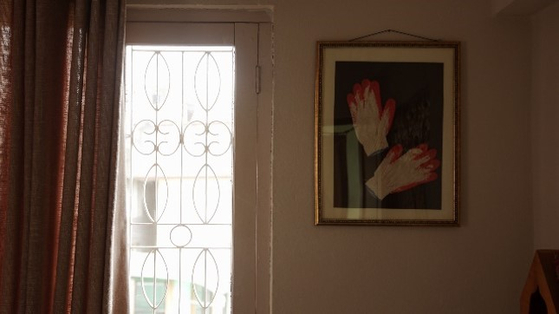 Minu hung up the work gloves with red paints in a frame which director Jee gave as a present. According to Minu, there are no work gloves like these in Nepal. [FULL FILM]