The Blue House on Thursday refuted an exclusive report by one of the country’s largest newspapers that a presidential secretary is leaving the job because his wife is a senior leader of the embattled advocacy group for former comfort women.

“I concluded that the Chosun Ilbo has made an intentionally malicious report today,” Yoon Do-han, senior presidential secretary for public relations, said in the morning. “I am stunned that this ludicrous report was actually published by a newspaper.”

The Chosun Ilbo published the story earlier in the morning, reporting that Presidential Secretary for Public Relations Planning Jung Gu-cheol is husband of Han Kyung-hee, current secretary-general of the Korean Council for Justice and Remembrance for the Issues of Military Sexual Slavery by Japan.

The civic group and its former leader Yoon Mee-hyang are the subjects of a criminal investigation, following allegations that they exploited survivors for 30 years and misappropriated donations and state subsidies intended to help the victims. 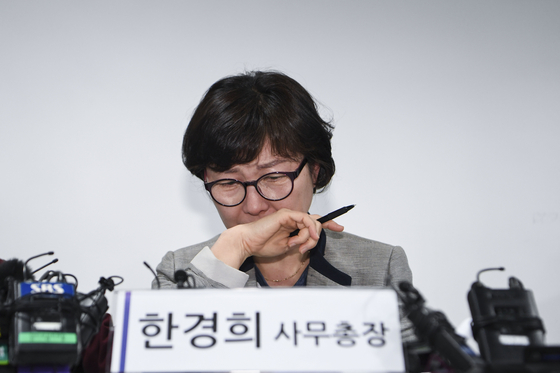 Han Kyung-hee, secretary-general of the Korean Council, speaks at a May 11 press conference to counter a survivor's claims that the civic group exploited victims for 30 years and misappropriated donations. [YONHAP]

The newspaper reported that Jung recently expressed his intent to resign due to his poor health.

“Speculation, however, is growing that he is leaving before the scandal touches the Blue House,” the report said. 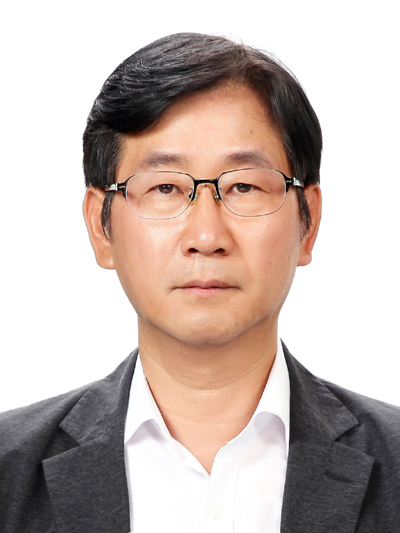 “This is completely groundless,” Yoon said in his statement. “I recruited Jung last year. At the time, he repeatedly rejected the offer, but reluctantly agreed to serve the post until April this year because of his friendship with me. He was scheduled to resign last month as promised, but I asked him to delay his resignation because a reshuffle of the secretaries was planned around the time.”

Yoon said the Chosun Ilbo has made multiple malicious and false reports against the administration in recent years.

“I want the people to think about why the Korean media’s credibility is hitting the rock bottom,” Yoon said.

“It is pitiful to see a desperate attempt to link the Blue House at all costs,” Jung wrote. “I joined the presidential office with a poor health condition. Because it is uncomfortable to serve my job, I submitted my resignation in April. I was asked to stay, and there was a delay in processing my resignation because of a reshuffle plan.”

“I do not have the ability to predict in April what will happen in May,” he added. “It is true that my wife is the secretary-general of the Korean Council. I have never concealed or bragged about it.

Before joining the Moon Jae-in Blue House in July 2019, Jung was an auditor at the Korea Federation of Small and Medium Sized Enterprises. He is a former journalist who worked at Media Today, a news outlet specializing in press-related news, as well as a newspaper published by the Journalists Association of Korea.

In 2004, he joined the Roh Moo-hyun Blue House as an assistant secretary for public affairs. From 2006 to 2009, he served as Roh's presidential secretary for domestic media.

In 2017, Jung was in charge of social media strategy for Moon’s presidential campaign.

Jung’s wife, Han, is in charge of accounting and financial management for the Korean Council. She was questioned by the Seoul Western District Prosecutors’ Office on Tuesday in connection with allegations of breach of trust, fraud and embezzlement.

Han Jung-woo, director of the Chunchugwan press center of the presidential office, will likely be appointed as Jung’s successor.

Kim Jae-joon, currently working at the Personal Secretary Office of the Blue House, will become the new director of the presidential press center.

Moon will also bring back Tak Hyun-min, a former Blue House staffer and a renowned event planner, as new protocol secretary. Tak had planned key events for President Moon, including the 2018 inter-Korean summits, but left the Blue House in 2019. 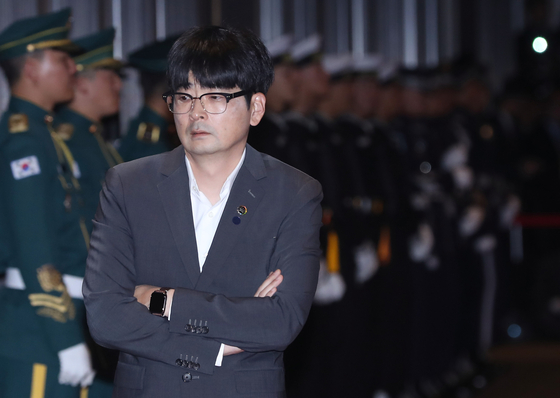 Tak Hyun-min, then a presidential advisor for event planning, checks on the venue for a welcome dinner for the 2019 Korea-ASEAN special summit in Busan on Nov. 25, 2019. [YONHAP]

Lee Ji-soo, a senior official of the Korean Standards Association, will be named secretary for foreign press.