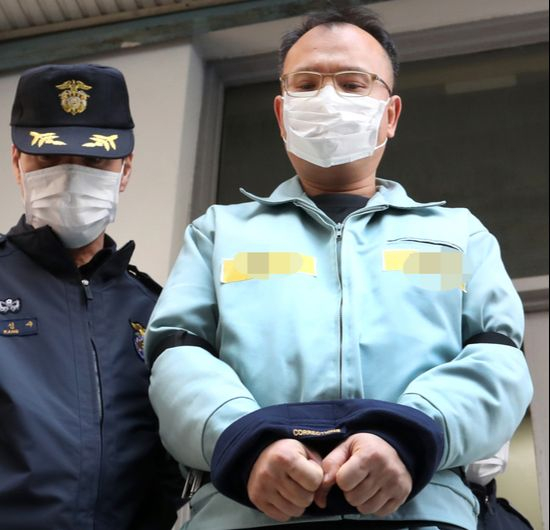 Yang Jin-ho, an executive convicted for multiple crimes including assault and animal cruelty, is led out of a court hearing last week with his hands bound by ropes. [YONHAP]


Yang Jin-ho — an executive who ran massive pornography networks online, beat his employees and killed chickens for fun — was sentenced to seven years in prison by a local court on Thursday.

The Suwon District Court said Yang, chairman of Korea Future Technology and the de facto owner of a host of online file-sharing companies like WeDisk and Filenori, used “personal insults” and “psychological damage” against his victims by subjecting them to beatings and forcing them to engage in bizarre acts of animal cruelty.

Yang was indicted and placed under pretrial detention in November 2018 after the online media outlet Newstapa released footage of the executive physically abusing a former employee and making other employees shoot a chicken with a bow and arrow, then decapitating it with a sword.

Former employees told Newstapa they were subjected to persistent acts of gapjil — or abuse of position — by Yang, ranging from forcing them to drink copious amounts of alcohol without bathroom breaks at company dinners, incessant beatings and verbal insults and shooting them with pellets from a BB gun he carried around the office.

Those accusations were incorporated into the charges against Yang, although the court noted Thursday that the statute of limitations for the BB gun claims had run out.

A subsequent police investigation found he had made a fortune of around 7 billion won ($5.6 million) through WeDisk and Filenori, on which tens of thousands of illegal pornography videos were uploaded by users allegedly instructed by Yang himself.

One of Yang's former employees also claimed in a press conference days after his arrest that the businessman had also sought to keep witnesses from testifying by offering them cash from his massive illegal pornography ring.

Yang was also accused of raping a woman at one of his many residences as well as beating up a professor based on suspicions that the man was having sexual relations with his wife.

“[Yang’s] sadistic butchery of a chicken at an employee outing [in 2015] is an unthinkable crime whose nature is particularly serious,” the court decision read.

But Thursday’s sentence may not be the end of Yang's legal troubles. The court is set to rule on the charge of pornography distribution separately after further deliberation on the evidence, according to prosecutors.

He is also accused of embezzling around 16.7 billion won from WeDisk’s corporate coffers and illegally monitoring his employees’ private text messages with spyware installed on their phones.

The court was forced to rule on Yang’s gapjil allegations first, as the mandate for his pretrial detention was due to run out on June 4. Prosecutors said the executive was also attempting to deliberately delay court proceedings so be could be released on bail.