Yoon Mee-hyang, a ruling party lawmaker-elect who until recently headed an advocacy group for victims of Japan’s wartime sexual slavery, denied allegations that she had misappropriated donations intended to help the survivors during a Friday press conference.

Yoon, the former head of the Korean Council for Justice and Remembrance for the Issues of Military Sexual Slavery by Japan and a proportional representative-elect of the Democratic Party (DP), broke her 11-day media silence and addressed the press at the National Assembly. The media conference took place on the eve of her four-year lawmaker term to start on Saturday. 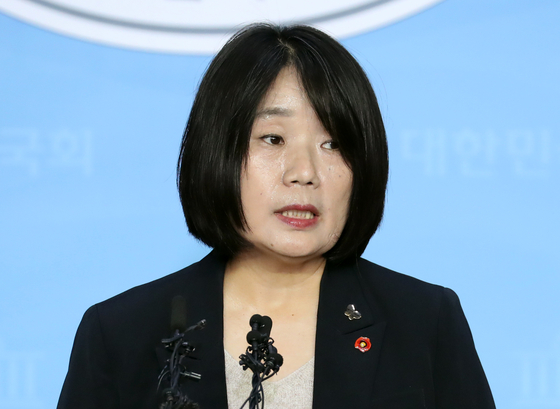 Yoon also made clear that she has no intention to give up her lawmaker seat, as some lawmakers and others have called on her to do.

“I will put my efforts toward untangling the controversy linked to my activity as a lawmaker,” she said.

The controversy over Yoon and the civic group's past actions began May 6 when Lee Yong-soo, a former "comfort woman" and long-time activist for their cause, made the explosive allegations during a press conference. Yoon read from a prepared statement before taking questions from the press, and rejected almost all suspicions raised against her.

“Because a questioning by the prosecution is imminent, I cannot discuss all small details today,” Yoon said at the beginning of the press conference, referring to an ongoing criminal probe into the Korean Council.

Prosecutors are investigating allegations that Yoon and the group misappropriated money, including government funding.

While denying any misappropriation of funds, Yoon apologized for using her personal bank account to collect public donations.

“I was naïve to think it is okay as long as there was no problem about financial [transparency],” Yoon said. “After spending donations, I transferred leftover funds to the account of the Korean Council. I have never used donations collected in my account for personal use.”

Yoon said she has raised a total of 280 million won ($226,640) that was deposited into her personal bank account. She said she spent 230 million won of the total on projects related to comfort women that were outside the purview of the Korean Council, with the remainder used by the Korean Council. She added that she plans to disclose all of the details to the prosecution.

Yoon rejected claims that Korean Council funds were used for her family’s purchase of five apartments. She said the family was able to buy the properties with loans from relatives and the savings from their monthly salaries.

Yoon also pushed back against allegations that the Korean Council exploited the sexual slavery victims for 30 years and misappropriated funds intended to help them.

“Until now, the Korean Council had three fundraising campaigns to support the survivors,” she said, adding that the money raised through the three events was paid to the victims.

She said the Korean Council has worked on various projects other than directly assisting the survivors, explaining that public donations were never meant to solely support the victims.

The central and local governments have been responsible for the welfare of the survivors based on a law established in 1993 at the initiative of the Korean Council, Yoon said.

“Therefore, criticism that we are not giving all public donations to the survivors failed to reflect the Korean Council’s accomplishments so far and its goals,” she said.

Yoon also denied claims that she had stopped the survivors from receiving the restitution paid by Japan in 2015 based on a bilateral settlement agreement, presumably to allow the civic group to continue its activities.

The lawmaker-elect also addressed the Korean Council’s substantial loss in the purchase and sale of a house in Anseong, Gyeonggi.

“Although it is regretful that the deal ended up causing a loss of public donations, I can say with confidence that I never profited from the deal,” Yoon said.