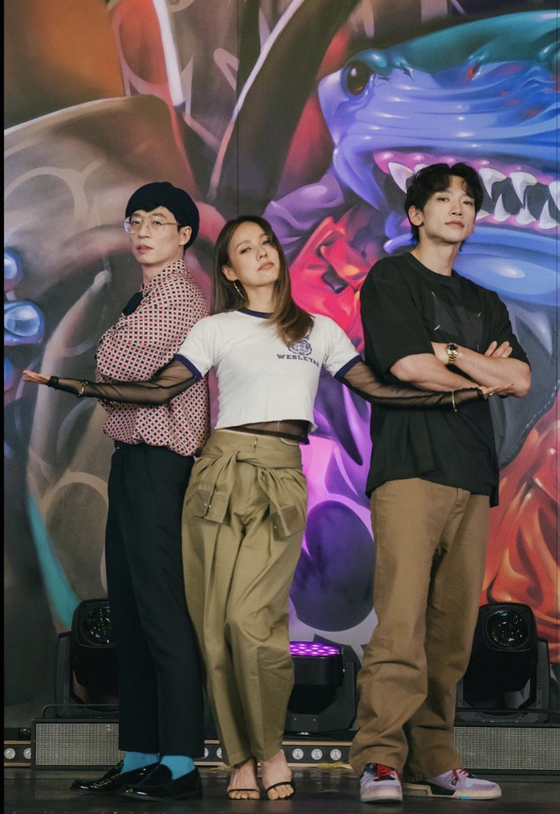 A preview from the upcoming episode for MBC variety show "Hangout With Yoo" on Saturday. From left, Yoo Jae-suk, Lee Hyori and Rain pose on stage as they practice as part of their newly formed mixed-gender group. [MBC]

It all began when Yoo launched a music project to create a mixed-gender pop group like the ones that dominated the music industry in the 90s — COOL, Roo’Ra, S#arp, and Koyote.

The comedian was initially set to return as Yoo San-seul, his stage name as a trot singer, but postponed his plan after a spate of new trot songs were released following the competition show “Mr. Trot” on TV Chosun, which ended in March.

The entertainer then turned his attention to getting advice from veteran singers and experts from the 90s to get a kick-start on his new project and met separately with both Lee and Jung to coax them into joining him.

Jung debuted in 2002 with “Bad Guy” (2002) which was an immediate hit, and was praised for his singing and dancing skills and songs such as “How to Avoid the Sun” (2003) and “Rainism” (2008). After he ended his contract with his former agency JYP Entertainment in 2007, his fame began to fade away. He turned his attention to producing songs and even expanded his career to acting.

His questionable songs “Gang” (2017) has recently seen renewed popularity but as the subject of mockery rather than its quality.

However, the veteran singer's laid back attitude and breezy acceptance that his song “wasn’t cool anymore” garnered favorable feedback from “Hangout with Yoo” viewers, and demand for the creation of the trio grew.

On May 21, the show’s official Instagram account uploaded pictures of the trio, riling up the fans, and on Friday, the show officially announced that Yoo, Lee and Jung have become members of the group.

“We’re still fitting together the puzzle of what the group is going to be like, and we’re still deliberating about recruiting new members,” the show said.

The 44th episode of “Hangout with Yoo” that feature the trio uniting for the first time will air on Saturday at 6:30 p.m.