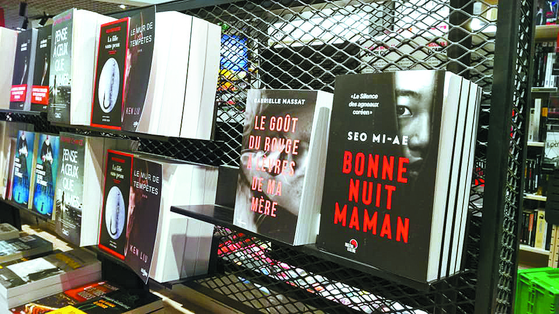 
Author Seo Mi-ae has been writing mystery novels for the past three decades after debuting in 1994 with “30 Ways to Kill Your Husband.”

But the 55-year-old author said she felt like “an outsider” for most of that time because the fiction genres were not well received in the country’s literary circle. But now she says she feels more accepted than ever before, especially in overseas markets.

An example of her success overseas can be seen with her 2010 fiction “Good Night, Mother,” whose publication rights have been sold to 14 countries so far. The fiction centers around a psychopathic girl.

The book was published in English with the title “The Only Child” in the United States in February.

In England, Carnival Films, a producer of award-winning drama series “Downton Abbey,” purchased film rights to “Good Night, Mother” with a plan to dramatize it. Terms of the contract are reported to be promising as Seo is set to receive incentives depending on the success of the drama series.

Another contract Seo signed with a German publisher paid royalties of 50,000 euros ($55,500) to her in advance, reveals the publisher’s expectations that the book was sure to be a hit.

Seo said, “When I look at the overseas publishing market, I get the impression that they are moving on a large scale.”

According to Seo, when a major, well-known publisher signs a contract with a certain author, other publishing companies from nearby countries tend to sign contracts with the same author, too.

Seo is not the only protagonist of this Cinderella story.

People who work in the country’s literary circle, from authors to publishers to people working at Literature Translation Institute of Korea (LTI Korea), all agree that overseas publishers treat Korean literature differently compared to the past because of how lucrative Korean fiction has become.

Overseas publishers who specialize in translating Korean novels into their own languages are popping up, and skillful translators are coming from regions which had no literary translation experts before.

The company was established by Pierre Bisiou, who took the helm of Paris-based publisher Serpent à Plume, and printed “The Vegetarian” written by acclaimed Korean author Han Kang.

Of all the genres of Korean literature, Matin Calme specializes in thriller novels.

The French publisher released Seo’s “Good Night, Mother” and Kim Un-su’s “Hot Blood.” It also plans to translate and release books from other lesser-known Korean authors such as Kim Jae-hee and Lee Jong-gwan.

Unlike most publishers, which print a small number of books for the first edition as a way of avoiding risk, Matin Calme prints between 4,000 and 5,000 copies for the first edition, willingly forking out 30,000 euros of publishing expenses, excluding translation fees, because the publisher is so sure about the success of Korean books in the market.

With the market for Korean literature growing, more translators are choosing Korean.

Mattho Mandersloot was born in the Netherlands in 1994. He came to Korea as he was first drawn to the culture, such as K-pop and taekwondo, but he recently decided to pursue a career of translating Korean literature. In order to do that, Mandersloot majored in Korean studies at the University of Oxford. 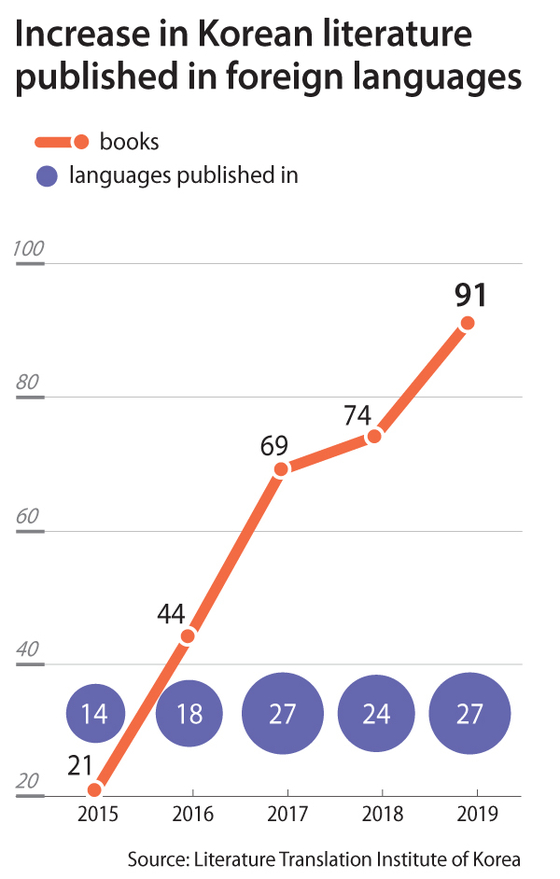 He translated Seo’s “Good Night, Mother” and Hwang Sun-mi’s “Miracle on Cherry Hill” into Dutch and is currently taking classes at LTI Korea.
“The competition is really tough in Korean to English, but there is only me in the [Korean to] Dutch market. So I expect to have a lot more work [compared to other translators],” said Mandersloot.

Another trend that is emerging is the advent of overseas agencies that manage Korean authors.

Asia Literary Agency, established by Kelly Falconer in 2013, manages Korean authors such as Bae Su-ah, Cheon Myung-gwan and Kim Yi-seol. The agency works as a middleman between authors and overseas publishers. This job was previously mostly undertaken by a few Korean agencies.

Nam Yu-seon, an official working in the copyright department of Minumsa, a local publisher, said, “I see changes from overseas officials I meet at international book fairs.”

With more overseas publishers competing to win contracts with Korean authors, the writers are being treated better than ever before.

Scribner Books, which publishes fictions of famous authors such as Stephen King and is an affiliate of publishing giant Simon & Schuster, reportedly purchased publication rights of the novel. 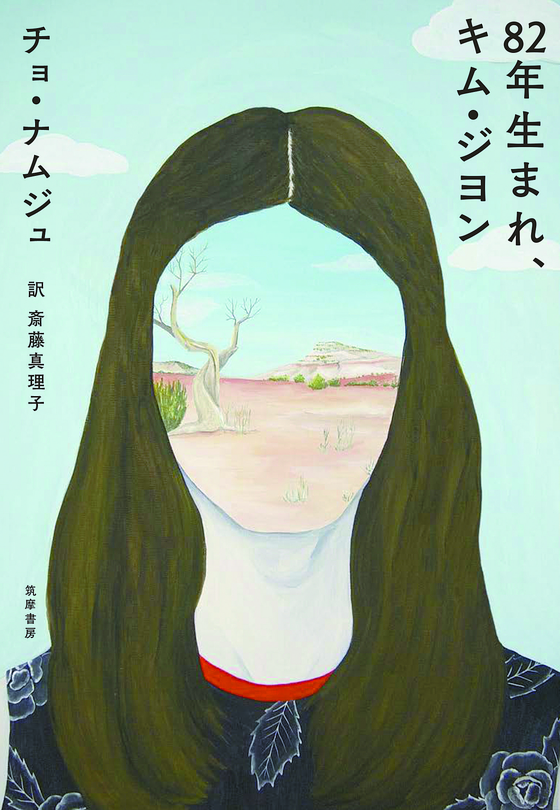 Korean literature is making a foray intooverseas markets. Some book covers of Korean literature with foreign languagetitles. Above is the cover for the Japanese version of ’Kim Ji-young, Born 1982.“


Cho’s feminism novel also achieved a feat in Japan, which is notorious for being hostile to translated novels. The book, which chronicles the turbulent life of an ordinary woman named Kim Ji-young, has sold 150,000 copies so far in Japan since its release in late 2018.

Kim Hye-jin’s novel “About Daughter,” which touches upon homosexuality, sold its publication rights to Picador Books after three publishers competed with each other in Britain.

In France, the novel will be printed by leading publisher Éditions Gallimard.

While Korean companies had been using middle agencies to export their books, now they hire their own staff members to do the job, like Changbi Publishers, which hired an employee in 2018 who is responsible for exporting publication rights. 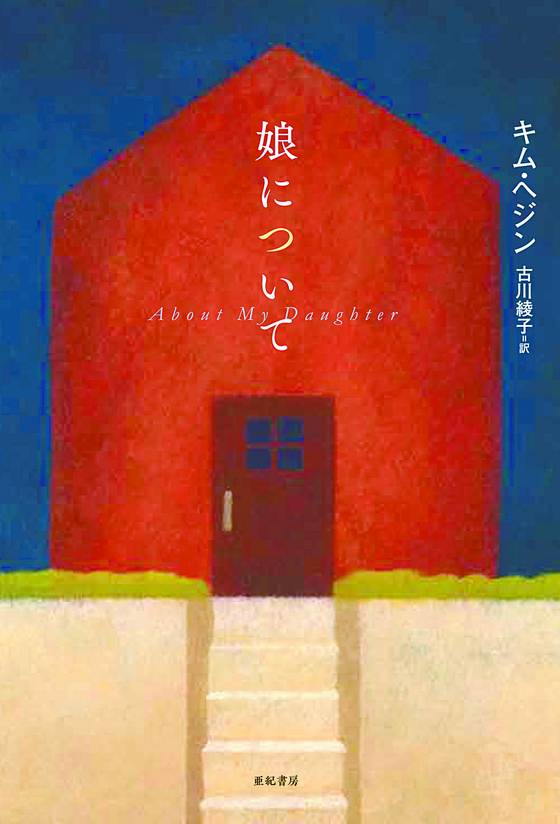 
“Authors in the past were just pleased to sign contracts with overseas publishers, but now they care more about details of the contracts such as who will be translating the novel and which publishers will be involved,” said Gwak Hyo-hwan, an official working at The Daesan Foundation. Along with the LTI Korea, the foundation has been granting various scholarships and organizing academic programs to support the translation of Korean literature.

Korean literature was an untapped, unknown territory for publishers overseas until Shin achieved success with “Please Look After Mom” in 2011. After Shin, Han with “The Vegetarian” proved in 2016 that Korean literature could be a treasure trove for those who are always in search of new stories.

“If the publication of Shin’s ‘Please Look After Mom’ in the United States has flung open the door to the overseas market, Han’s winning of the Man Booker International Prize with ‘The Vegetarian’ was a sensation,” said Falconer, the founder of the Asia Literary Agency.

“Before Shin and Han, publication rights of Korean literature were sold to overseas publishers from time to time. But now I see the business is thriving and [sales of publication rights] happen simultaneously,” said Lee Gu-yong, the head of KL Management, an agency that worked between a local publisher and a U.S. publisher to release Shin’s book in English.

While Korean literature has come a long way, it still remains to be seen if it has fully captured the hearts of global readers.
Nam from local publisher Minumsa said, “If the altitude of the mountain we’re climbing is 100, we’ve only come to 30.”

Go Young-il, the team head at the overseas business department of LTI Korea, said, “In order to continue this publicity we’re getting from the overseas market, we have to nurture translators who can contextualize Korean novels depending on markets.”