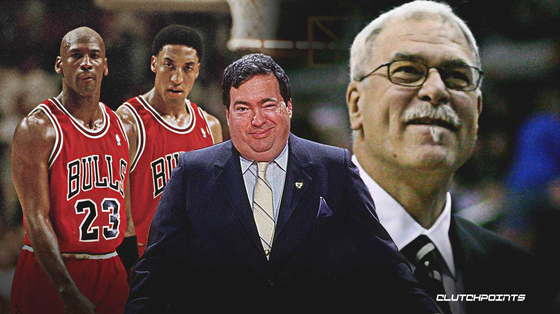 LEE DONG-HYUN
The author is the deputy industrial team editor of the JoongAng Ilbo.

He was a baseball player in high school, and upon graduating, he started a career as a scout for the Baltimore Bullets, now the Washington Wizards. Though not a basketball player, he had a good eye to spot talent, and he discovered Hall of Famers like Earl Monroe and Jerry Sloan.

Krause became famous when he became the general manager of the Chicago Bulls in 1985. The Bulls drafted Michael Jordan in 1984, but the team was still struggling. Krause drafted Scottie Pippen and Horace Grant in 1987, and brought in Bill Cartwright in 1988 and B.J. Armstrong in 1989. What made the team complete was Phil Jackson as head coach in 1989. After that, the team achieved two “three-peats” from 1991.

ESPN’s The Last Dance can be viewed on Netflix Korea. The documentary is about Michael Jordan and the Bulls dynasty in the 1990s. The greatest villain here is Krause. He was a genius scout and outstanding manager, but he did not win the hearts of the superstars, including Jordan. Jordan, other Bulls players and Jackson often clashed with him. While the late Krause appears in interviews, he did not get a chance to explain himself.

It is easy for viewers to remember him as someone who brought down the Bulls dynasty. But Krause was the founder of the dynasty, the architect of the greatest team in history. Without Krause, there may not have been Michael Jordan. There is no perfect leadership. The most important leadership feature may not be charming character.

An important fact is that Jerry Krause was not just a villain as featured in the Last Dance, just as Michael Jordan is no superhero. Every individual has different sides, as well as some hidden aspects. Life is not as simple as in a movie.