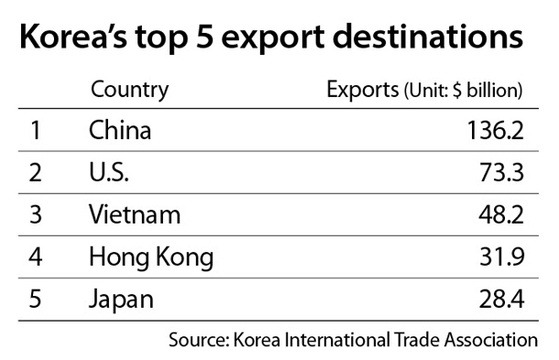 Washington’s move to strip Hong Kong of autonomous status in terms of trade will hurt Korea’s export-reliant chipmakers including Samsung Electronics and SK hynix as they might not be able to use the former British colony as a re-export center for China.


The Korea International Trade Association (KITA), a private organization representing over 70,000 companies, said some exporting companies may be forced to switch their shipping routes to avoid Hong Kong, eroding a range of shipping efficiencies and customs benefits.

Hong Kong was the fourth largest export destination for Korea last year, taking $31.9 billion worth of goods. Some 98 percent were destined for mainland China, the organization said.


The United States has yet to announce a timeline or specific details as to which economic privileges would be removed.

U.S. President Donald Trump said on Friday that the move "will affect the full range of agreements we have with Hong Kong from our extradition treaty to our export controls on dual use technologies and more with a few exceptions.”

Despite the scant details, KITA said that an impact is "inevitable for Korean exports."
In the short-run, the hardest-hit will be companies re-exporting goods through Hong Kong to the United States.

“With the special status removed, Hong Kong will be subject to the punitive tariffs imposed by the United States on China, which are set at up to 25 percent from the current 1.6 percent,” the trade organization said.

It noted, however, that the amount of Korean goods re-exported to the United States is meager at 1.7 percent of the total.

A broader impact could be felt if Hong Kong ultimately loses its status as a global commerce and business hub.

In that case, more Korean exporters might choose to directly export items to China rather than using Hong Kong for its logistics centers and favorable customs and tax policies.

A source at SK hynix said that the company could consider a shift to direct exports to mainland China in the wake of changes to Hong Kong's status.

“We’ve used Hong Kong as a logistics hub, but we are able to go straight to China, although there could be additional costs for building shipping centers,” said the source, who denied to be identified since the decision has not been made.

KITA noted that the costs would not be overwhelming to major chipmakers like Samsung Electronics and SK hynix, but would hurt smaller enterprises more.
“Small- and mid-sized exporters might face trouble covering the increased shipping costs and ensuring alternative plane routes,” the report said.