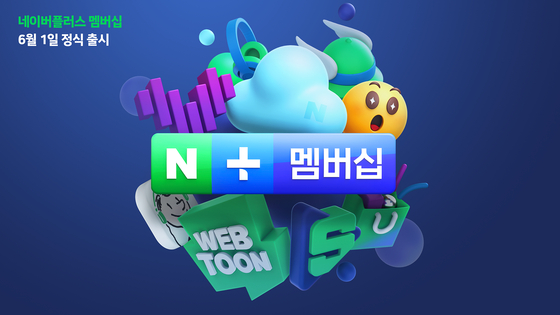 An image of an ad promoting the launch of Naver Plus Membership. [SCREENSHOT]

The company is targeting current users of its digital content who also shop through the platform.

In addition to the discounts, four other offers can be chosen by subscribers, including: access to 10 webtoon series, 300 songs from its music streaming service Vibe, a 3,300 won cash reward for video streaming, free 100 megabytes of storage for Naver's cloud service and discount coupons for Naver's audiobook service. Members can receive upgraded access to digital content for an additional monthly fee.

Sign-up will begin at 3 p.m. Monday afternoon. New members can try out the service for free for the first 30 days. The company said it will likely maintain the monthly price for some time and that the product will evolve over time.

“Naver wants to use its affordable price to penetrate the market, secure as many subscribers as possible and later leverage it to create additional value,” explained Kim Seong-Cheol, a professor in the department of media and communications at Korea University.

Last year, Naver reported 20.9 trillion won of online transactions, exceeding one of the biggest e-commerce platforms, Coupang, by more than 3 trillion won. With more shoppers locked in to Naver, individual online retailers will have no choice but to depend on the portal to make sales.

Naver’s rewards may be better than membership services of other platforms, like Gmarket and WeMakePrice. The reward for Gmarket’s Smile Club membership is 3 percent. WeMakePrice rewards are set at 2 to 4 percent.

“Many e-commerce sites already pay fees to partner with Naver since it generates so much traffic. Our dependence on Naver will become even greater as it tries to expand its power,” said an industry source.

Naver will likely accelerate the subscription service trend among IT companies, which was first sparked by SK Telecom last year.

“If more competitors come into the market, the prices will follow the law of supply and demand. The success lies in who will be able to win the hearts of consumers,” said Kim.