The number of new daily Covid-19 infections has fallen below 30 for the first time in a week as health authorities scramble to get one cluster under control while other potential clusters seem to be contained.

The Korea Centers for Disease Control and Prevention (KCDC) announced Sunday that 27 new Covid-19 cases were detected across the nation Saturday, 12 of which were imported cases and 15 domestic. The last time Korea’s daily new infections were under 30 was May 23, when 25 cases were reported.

All of Saturday’s 15 domestic cases are residents of the Seoul metropolitan area — five in Seoul, seven in the surrounding province of Gyeonggi and three in Seoul’s neighboring city of Incheon.

Korea has reported a total of 11,468 cases as of Saturday midnight.

Inflatable characters are seen in the stands Sunday at Jamsil Baseball Stadium in Songpa District, southern Seoul, while the Doosan Bears face off against the Lotte Giants. The KBO last Thursday announced plans to continue no-spectator games for several more weeks after recent spikes in Covid-19 cases in Korea. [YONHAP]

By Saturday midnight, 270 people had died of Covid-19, up by one from the previous day, while 10,405 people have been declared fully recovered, up by seven from the day before. Thirty-nine cases were detected in Korea Friday and 58 cases on Thursday. The peak of last week was on Wednesday, when 79 cases were added.

For days, Korean health officials have been grappling with a new cluster that emerged at a Coupang distribution center in Bucheon, Gyeonggi, in what appeared to be linked to an earlier cluster traced to nightclubs and bars in Itaewon-dong, central Seoul, in early May.

Over 4,000 people linked to Coupang’s Bucheon center, including former and current employees and their families, have been tested for Covid-19, and as of Sunday noon, a total of 111 people were shown positive.

Seventy-five people were or are workers of the Bucheon distribution center, while 36 are the people they had contact with, including friends and relatives. Nineteen people live in Seoul, 44 in Incheon and 48 in Gyeonggi, KCDC data showed.

The Itaewon cluster, which doesn’t include the Coupang Bucheon cluster in KCDC’s tally, reached 270 cases as of Sunday noon, one more than on Saturday noon. Officials identified the person as a relative of a student at a private hagwon, or cram school, in Incheon, whose teacher visited an Itaewon nightclub early last month.

Of 270 infected patients linked to the Itaewon hot spot, 96 are people who personally visited a club or bar in Itaewon, while the rest are the people they had contact with.

A Covid-19 case at another Coupang distribution center in Goyang, Gyeonggi, which was first detected last Wednesday evening, hasn’t grown into a major cluster like in Bucheon, health officials said, though contact tracing is still ongoing. A worker at Coupang’s Goyang distribution center was believed to have contracted the virus after meeting a colleague from the Bucheon center.

Kurly, which runs Market Kurly, announced in a statement that a section of its Market Kurly distribution center in Songpa that was shut down after the Market Kurly employee received her positive test result Wednesday has reopened Saturday after thorough disinfection procedures on all its work areas, offices, restrooms, cars and other public spaces and communal equipment.

The company said no other employee at the Songpa distribution center has tested positive for Covid-19, and those who tested negative will nonetheless be ordered to self-quarantine at their homes for two weeks, the incubation period of the virus.

Kurly stressed that all delivery packages in the warehouse have been disinfected, and that products that cannot be cleaned have been discarded.

No other employees at KB Life Insurance in Jung District, central Seoul, have tested positive for the coronavirus, too, after eight workers on the seventh floor of the 17-story Central Place building were found last week to be infected. Health officials said they aren’t sure yet how the virus spread to the insurance agency branch, which has a work environment similar to that of a call center. 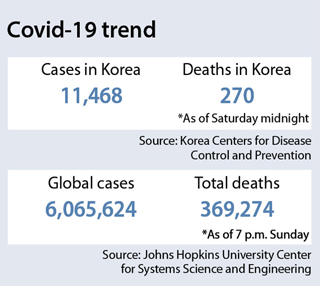 As large Covid-19 clusters in and around Seoul have largely been brought under control, cases continued to sporadically pop up in other places over the weekend, including one that threatened the reopening of schools in Busan.

An 18-year-old senior at Naesung High School in Geumjeong District, Busan, about 325 kilometers (202 miles) southeast of Seoul, tested positive for the coronavirus last Friday a little over a week since he began going to school for the first time since the pandemic started.

Health officials aren’t sure how he contracted the virus and said he hasn’t traveled outside the city recently, which means the virus could be silently spreading in Korea’s second-largest city. At least 115 out 160 people that the high school senior had contact with have received their test results by Sunday morning, and they were all negative, Busan health officials said.

Naesung High School said it will shut the school down and hold online classes for students for 14 days till June 12.

News about a high school student getting infected and possibly spreading the disease to his or her classmates comes as Korea has gradually been reopening schools since mid-May.

High school seniors were the first to start on May 20, followed by kindergartners, first, second, ninth and 11th graders last Wednesday. Third, fourth, eighth and 10th graders are scheduled to begin this Wednesday, while fifth, sixth and seventh graders will start next Monday.

At Gachon University in Seongnam, Gyeonggi, a college junior and senior who visited the school's campus last week to attend some in-person classes and take midterms have been infected with the coronavirus, prompting some 200 people they had close contact with to get tested as well.

The university said it has held classes online this semester but allowed some classes that involve experiments or other forms of practical education to be held face-to-face on campus, and opened the school last week for students to take their midterms.

The two Gachon University students are believed to have been infected by a 29-year-old man they live with, who apparently contracted the virus from a 28-year-old man in Gangbuk District, northern Seoul. They all are members of Korea Campus Crusade for Christ, a Protestant missionary group of Korean college students. At least seven infections have been traced to the 28-year-old, though health officials aren’t sure yet how he got infected in the first place.

In Gwangju, Gyeonggi, at least eight infections have been traced to a nursing home for the elderly after the first case was detected last Thursday. A Gwangju official said the first patient, a 68-year-old woman from Yongin, Gyeonggi, went to a wedding ceremony in Seoul on May 24 but that it was unclear whether she contracted the virus there.