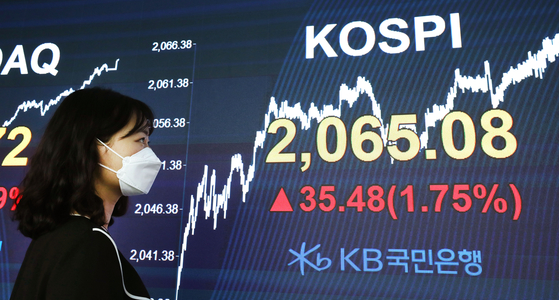 An employee looks at the Kospi displayed on a screen in the dealing room of KB Kookmin Bank, in the financial district of Yeouido, western Seoul, Monday. [NEWS1]


Stocks closed sharply higher Monday on hopes of a quick economic recovery prompted by a government push for a third supplementary budget and eased concerns over tensions between the United States and China. The won sharply rose against the dollar.

President Moon Jae-in confirmed the government's push for this year's third supplementary budget, which he said must be the largest in the country's history, prompting hopes for a quick recovery of the economy hit by the Covid-19 pandemic.

The stock index started off strong with improved investor sentiment, helped by the milder-than-expected political friction between the United States and China over Beijing's passage of a new national security law that may severely undermine civil liberties of Hong Kong citizens.

"Mr. Trump has had many difficulties from the new coronavirus, and seems to be averting that pressure by maintaining the U.S.-China tension to a certain degree that does not harm his home economy," Park said.

In the local market, most large cap shares ended higher.