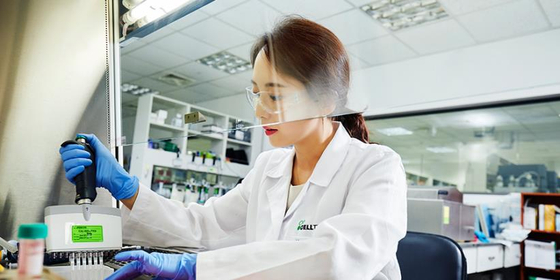 A Celltrion researcher tests for the development of Covid-19 antiviral antibody treatment in the laboratory. [CELLTRION]

The first clinical trials on human patients are scheduled for July, with Celltrion planning to manufacture the drug ahead of the tests this month.

The pre-clinical study assessed recovery time by comparing the efficacy of the drug on two groups of ferrets that received different dosages and another control group that did not receive any treatment. All three groups were injected with the Covid-19 virus.

Recovery was measured by scoring the severity of symptoms — such as having a runny nose, coughing and body aches — on the animals. The treated groups saw recoveries in the symptoms “after the first day of treatment. From the fifth day, significant clinical remission was observed,” Celltrion said.

While the placebo group experienced sustained levels of lung inflammation, the two groups that received the treatment in different dosages experienced improvements in lung tissue close to a normal state, Celltrion said.

After the seven-day test was completed, researchers observed up to a 100-fold reduction in the load of the Covid-19 virus in the ferrets that received the highest dose. The load of a virus is a way of measuring the quantity of the virus found in a given amount of bodily fluid.

The pre-clinical study conducted with Chungbuk National University College of Medicine was a follow-up study after identifying antibody candidates for the treatment in April.