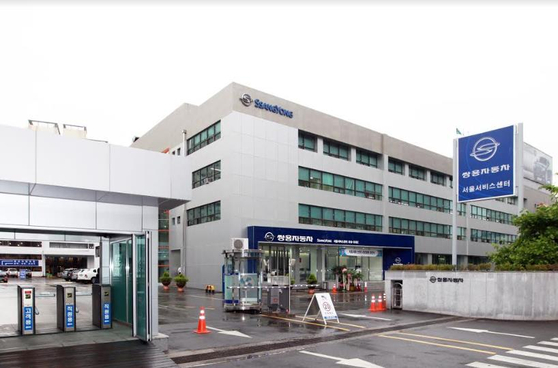 SsangYong Motor on June 1 sold one of its service centers in Seoul to secure liquidity. [YONHAP]

Beleaguered SsangYong Motor managed to secure more liquidity by selling one of its service centers in Seoul.

The service center will continue to operate for the time being, as SsangYong Motor sold the branch on the condition that it could continue leasing it for the next three years.

This is the second non-core asset SsangYong Motor has sold this year in order to secure liquidity that will save the company from going bankrupt.

The automaker recorded a net loss of 193 billion won in the first quarter of this year. Its parent company, which was supposed to salvage the Korean automaker by providing a 230 billion won fund, scrapped the plan after being hit hard by the coronavirus pandemic last month. SsangYong Motor's external auditor even refused to issue its opinion on the company’s financial status, citing its questionable existence in the future.

The latest real estate deal, which according to the automaker will be paid in full by the end of this month, will be used to put out some of the most urgent fires along with 23 billion won secured early this year by selling one of its logistics center in Busan and a 40 billion won emergency fund provided by Mahindra & Mahindra in May in exchange for the cancellation of the initial investment plan.

The automaker has some 254 billion won of debt that matures by the end of this year, including some 90 billion won due by July.

“Depending on the business situation in the future, we will decide whether to sell off additional non-core assets such as the logistics center in Cheonan [South Chungcheong] to secure more liquidity,” said Choi Jin-woong, spokesman for the company.

“It could be seen that all of our facilities except for the Pyeongtaek [Gyeonggi] plant and Changwon [South Gyeongsang] plant are viable options to be sold off, but nothing is decided yet.”


SsangYong Motor sold 7,575 units in Korea in May, 25.9 percent more than the previous month, but 25 percent less compared to the same month last year. It managed to export 711 units in May, a huge 68.1 percent drop on year.

SsangYong Motor said it will launch two new models — the partially revamped G4 Rexton and Tivoli Air — in the latter half of this year to recover sales. Next year, the automaker is planning to launch its first-ever fully-electric midsize SUV in Korea.