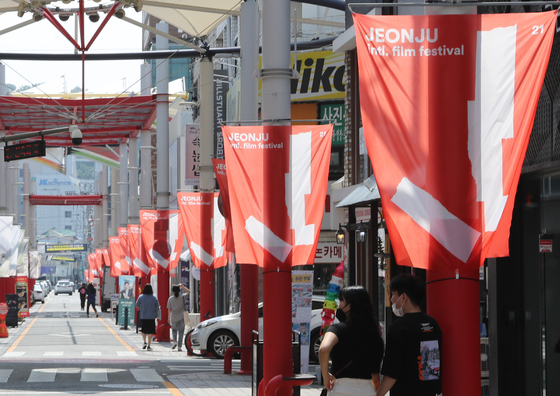 The relatively empty Jeonju Cinema Street, which is usually bustling with visitors during the festival period. The festival is being postponed indefinitely after a spike in coronavirus infections. [YONHAP]


The 21st Jeonju International Film Festival is indefinitely postponing offline events due to a new cluster of infections at the Coupang distribution center in Bucheon, Gyeonggi.


According to the festival organizers on Monday, an offline screening event for medical workers in Jeonju, North Jeolla, was delayed.

Called “Thank You Challenge screening event,” the offline gathering was to express gratitude for those who have been on the front line of combating the coronavirus in Jeonju. The event was to be held from June 3 to 5, and organizers were to select films from this years’ festival that could offer comfort to the workers.

As the festival is being held as a closed event with only related filmmakers and judges participating throughout the period, the organizers planned to extend the films’ screenings in Jeonju theaters to Sept. 20 for audience members who wanted a chance to view the films which aren't available on the local over-the-top media platform Wavve.

Currently only 96 films of the 180 films are available via the streaming service.

“It seems like coronavirus infections are spiking again, and we can’t say for sure when we can hold these two events again,” a festival organizer said. “We will be announcing the schedules again [once the outbreak dies down], but as for now, we can’t make any promises.”

The film festival was scheduled to run until June 6.