An advocacy group for the Korean victims of forced labor and sexual slavery by Japan during World War II on Monday buttressed recent allegations that Yoon Mee-hyang, a lawmaker from the ruling Democratic Party, and her civic group had exploited former "comfort women" survivors for decades.

The Association for the Pacific War Victims and Bereaved Families demanded during an afternoon press conference in Ganghwa County, Incheon, that Yoon resign from her National Assembly seat. The group also said that the Korean Council for Justice and Remembrance for the Issues of Military Sexual Slavery by Japan, which until recently was headed by Yoon, must be dismantled.


Yang Soon-im, the head of the association, held the press conference to condemn Yoon and the Korean Council, amid a snowballing scandal over their alleged financial mismanagement and exploitation. The controversy started after Lee Yong-soo, a 91-year-old former comfort woman, said last month that survivors were politically and financially exploited by Yoon and her civic group for 30 years. 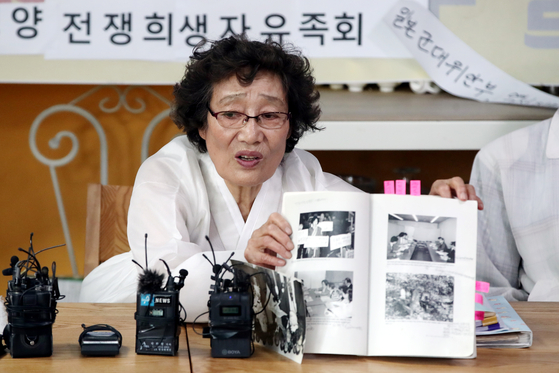 Yang Soon-im, head of the Association for the Pacific War Victims and Bereaved Families, holds a press conference on Monday to support a comfort woman survivor's revelation that Yoon Mee-hyang, a lawmaker of the ruling Democratic Party, and her civic group, the Korean Council, had exploited victims for decades. [YONHAP]

Yang, 76, is an activist heading the association established in 1973 by the Korean victims of Japan’s military conscription, forced labor and sexual slavery and their surviving families. She had also led a 13-year-old court battle in Japan by former comfort women. The Japanese Supreme Court dismissed the redress lawsuit in 2004.

“Yoon and the Korean Council were never a group helping the comfort women survivors,” said Yang. “They were just bent on creating another powerful, rich group.”

Yang urged the public to stop donating to the Korean Council. She also said the government must stop offering subsidies to the civic group.

“It is true that the Korean Council’s weekly demonstration on Wednesday has enlightened the international community about the comfort women issue,” Yang said. “But that was not to best serve the victims.”

“We spent 13 years on a redress lawsuit in Japan,” Yang said. “We worked hard to resolve the issue with Japan, but we were labeled as Japanese collaborators. I don’t know what part of our efforts were pro-Japan.”

Yang also said some comfort women survivors wanted to receive restitution from the Asian Women’s Fund, created in 1995 by Tokyo to redress the victims, but the Korean Council denounced them by calling them “prostitutes.”

“The Korean Council said it is demanding Japan’s official apology,” Yang said. “But I don’t know what they meant. Japan’s chief cabinet secretary and prime minister have issued statements.”

Yang also said all accusations Lee made last month against Yoon and the Korean Council are all true.

Yoon, nominated by the ruling party as a proportional lawmaker and elected to the post in April, started her four-year term on Saturday. She made the first appearance in her National Assembly office on Monday.

“She said she will work harder to resolve the comfort women issues when she joins the National Assembly,” Yang said. “What will she do? She hasn’t done nothing. She must resign.”

At the press conference on Monday were children of the late Kim Yang-yeop, a former comfort woman.

“My mother died over 20 years ago without receiving any restitution,” said Kim’s daughter. “Those who should have received restitution didn’t even get a penny, but Yoon was selfishly lining her own pocket.”