Exactly how the virus penetrated the church communities is being investigated through contact tracing, but almost all worshippers live in or near the area that houses the Korean e-commerce company Coupang’s distribution center in Bucheon, Gyeonggi — a recent Covid-19 hot spot.

The Coupang Bucheon hot spot has largely come under control after more than 4,000 people linked to the center completed virus testing and 112 patients were detected by Monday noon, but health officials now warn of the next phase in containing a major cluster: controlling sub-clusters. 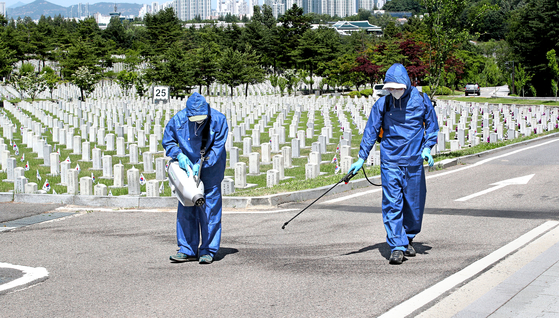 Workers at Seoul National Cemetery in Dongjak District, southern Seoul, carry out disinfection work Monday. Health officials last week re-closed all public facilities in Seoul, Incheon and Gyeonggi until June 14 to stem the spread of the coronavirus after a major cluster emerged at Coupang's distribution center in Bucheon, Gyeonggi. [YONHAP]

All but two domestic cases Sunday were from the Seoul metropolitan area — 18 were in Incheon, 12 in Gyeonggi and one in Seoul. Another Covid-19 case was detected in South Jeolla and one in Daegu. Five cases were imported — two from Europe and three from the Americas, KCDC data showed.

By Sunday midnight, 271 people had died, up by one from the previous day, while 10,422 people have been declared fully recovered, up by 17 from the day before.

When breaking down the 28 new infections found in the Seoul metropolitan zone Sunday, health officials said 23 cases were traced to 13 small churches in the Incheon and Gyeonggi area, all either pastors or adherents of those houses of worship.

The patients appear to have contracted the virus from a 57-year-old female pastor in Bupyeong District, Incheon, who was diagnosed with Covid-19 last Sunday after coming down with symptoms of the virus last Thursday.

Incheon officials said contact tracing showed the female pastor visited nearly 10 different churches in the city lately, holding group prayer meetings and revival services. Several cases were traced to people who attended a revival service at a church in Michuhol District, Incheon, last Thursday at 6:30 p.m., which was participated in by the female pastor.

How the female pastor contracted the virus has yet to be revealed, and no clear links between her and the Coupang Bucheon cluster have been found yet. All 13 churches have been shut down, and Incheon officials are in the process of contacting every member of each church to tell them they need to be tested for Covid-19.

In nearby Gunpo and Anyang, Gyeonggi, nine cases of infections have been traced to a group of 25 members of 12 different churches in the two cities who gathered late last month for a trip to the southern resort island of Jeju Island. All nine people were part of the trip, which lasted from May 25 to 27 and included stops at 15 places on the island, many of which were popular landmarks, officials said.

Unlike the Incheon hot spot, Anyang and Gunpo officials said Monday they aren’t sure yet who was the initial spreader of the virus. Most patients on the trip were diagnosed with Covid-19 Sunday, while at least one was diagnosed last Saturday.

Jeju officials said Monday that some 160 people the tour group had close contact with, including workers at the island’s shops, restaurants and a hotel, have been put under self-quarantine, while passengers on the planes they took were also being contacted.

The group was said to have taken Air Busan flight BX8017 from Gimpo International Airport in Gangseo District, western Seoul, at 7:30 p.m. on May 25 to Jeju Island, and then took the Jin Air flight LJ312 at 1:45 p.m. two days later from Jeju to travel back to Seoul.

Several schools in Anyang and Gunpo were on high alert Monday after health officials revealed the infected patients’ recent movement history and it showed that some went to school and had contact with other children from other schools.

All 12 churches in Anyang and Gunpo have been closed. 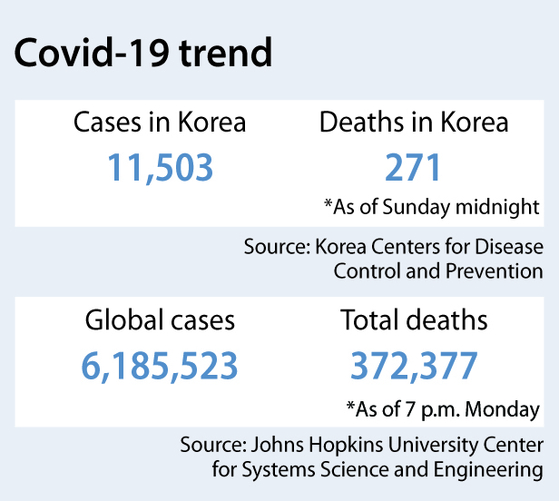 In Suwon, Gyeonggi, at least seven Covid-19 cases have been traced to a Protestant church after a 50-something-year-old female adherent had contact with a worker at Coupang’s Bucheon distribution center on May 22. Health officials said it appeared the churchgoer contracted the virus after conversing with the Coupang worker for 10 minutes.

Unlike most of the aforementioned churches in Incheon, Anyang and Gunpo, which are small, officials said the Suwon church has some 400 worshippers, all of whom are now going through virus tests. The church shut down last Friday.

At Gachon University in Seongnam, Gyeonggi, one additional Covid-19 case was detected Monday, a 25-year-old senior at the school, but health officials said he appeared not to have any contact with the two earlier cases discovered on the school campus.

A junior and senior at the university tested positive for the virus last week after visiting the campus to attend some in-person classes and take midterms, prompting some 200 people they had contact with to get tested. The two students are believed to have been infected by a 29-year-old man they live with, who apparently contracted the virus from a 28-year-old man in Gangbuk District, southern Seoul.

All four men are members of the Korea Campus Crusade of Christ, a Protestant missionary group of Korean college students. At least seven infections have been traced to the 28-year-old, though officials aren’t sure how he got infected in the first place.