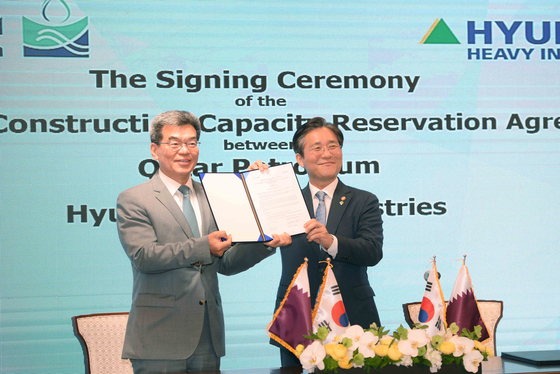 The agreements were signed by Saad Sherida Al-Kaabi, President and CEO of state-owned Qatar Petroleum, and Minister of Trade, Industry and Energy Sung Yun-mo. Al-Kaabi is also the Minister of State for Energy Affairs.

“Despite the recent difficulties facing the international community, today’s signing was made possible by the long-standing mutual trust between Korea and Qatar as well as the outstanding risk management capability of Minister Al-Kaabi,” said Sung during the ceremony.

“The signing of today’s agreements with the three esteemed Korean companies reflects our commitment to the North Field expansion projects, even during these extraordinary times,” said Al-Kaabi at the signing ceremony. “We are moving full steam ahead with the North Field expansion projects to raise Qatar’s LNG production capacity from 77 million [tons] today to 126 million tons per annum by 2027. These agreements will ensure our ability to meet our future LNG fleet requirements to support our expanding LNG production capacity and long-term fleet replacement requirements.”

The North Field expansion is a project that encompasses expanding the gas field in the north-east coast of Qatar.

The new LNG vessels will be equipped with the latest generation slow-speed dual fuel engines.

“The agreements are particularly meaningful as they were made despite energy prices being relatively weak,” wrote analyst Han Young-soo from Samsung Securities in a report Tuesday.

The deal with Qatar Petroleum means LNG vessel prices should stay solid because it limits shipbuilders’ capacity to take additional LNG carrier orders, according to Han.

“The agreements should dispel market doubts over the Korean shipbuilding industry’s competitiveness,” lessening concerns about competition with Chinese shipbuilders.