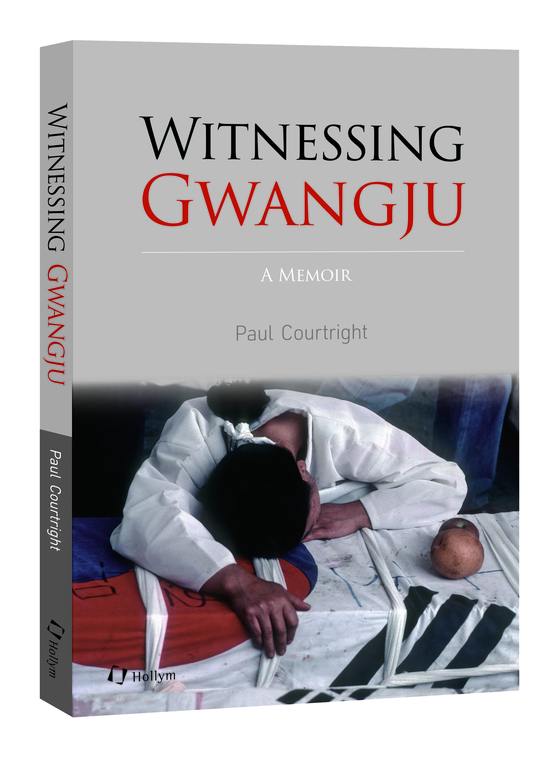 When Paul Courtright, a Peace Corps volunteer from Idaho spending his first year in a rural town in Naju, South Jeolla province, got on the bus to Gwangju to assist two Korean patients on May 19, 1980, there was no way he could have predicted the turn of events that would follow.

“Two soldiers, their stances threatening, were challenging a young man near the buses,” reads an excerpt of Courtright’s recently published book, “Witnessing Gwangju.”

Soon, the young man was on the ground, with a pool of blood surrounding his head.

“It was just unadulterated shock, to see a young man who was very submissive being beaten with such savagery,” he told the Korea JoongAng Daily over the phone on May 22. “People in Gwangju and Jeonnam [South Jeolla] were not treated as normal people by the military, and these were people that I was eating with, talking with, working with every day.”

His mission for the day — getting the patients to a hospital in Suncheon — changed quickly as Courtright found himself in the middle of the May 18 movement in Gwangju, the historic democratic uprising in Korea in 1980.

As he walked, biked and hitched rides between Naju and Gwangju across the next few days, he spoke with students, soldiers, local residents and even members of the foreign press, writing down his accounts of each day in his journal.

But none of what he saw — students getting tear-gassed, buses used by protesters riddled with bullet holes, military tanks standing ominously at checkpoints in and outside of Gwangju, local residents voluntarily giving up arms and destroying them to prevent heightened clashes with the military and bodies lined up at a mortuary — was revealed to the public.

“No one ever came,” wrote Courtright in his book, describing the time he and another Peace Corps official went to the U.S. Embassy on May 26, 1980, to report what he saw.

“What good is it to be a witness if you can’t tell anybody about it?” he told the Korea JoongAng Daily. “I couldn’t tell it for years, for all the rest of my time I was in Korea, I couldn’t tell any of my colleagues about it, and there was nothing in the news about it and any mention in the news was always derogatory toward Gwangju. It was hard.”

Forty years on, facts about the event, such as the death toll or who had ordered the military to open fire on civilian protesters, are still being disputed.

The Korea JoongAng Daily recently spoke with Courtright to discuss how he came to publish his eyewitness account decades after his time in Gwangju and what it was like to live as a witness unable to tell his story. The following are edited excerpts of the interview. 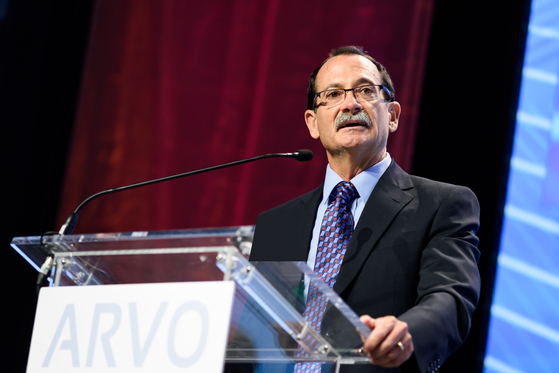 “Witnessing Gwangju” chronicles what you saw in Gwangju 40 years ago. How did you come to be a witness in the first place?
I felt at the time, until the reporters showed up, that being there was almost useless […] I felt the only way I could be of value was simply to be seen on the street, to be seen as a pureun noon [blue eyes in Korean, an expression used by Koreans in the past to describe foreigners] —  to be seen by people on the street and for them to recognize that we have not abandoned the people of Gwangju. But other than that I was quite frustrated.


In some of your accounts in the book, you seem to undergo a transition as a witness, from the point of an observer to someone who experiences some of the same emotions and thoughts as local civilians.
I did go through a transition and part of that started even before everything was going on in Gwangju, because I had been in Korea for over a year at that stage. [When I saw the young man] being beaten, that was just unadulterated shock. That then kind of morphed into anger, how can they be doing that? I think it was at that stage when I really grew angry at the response that I saw from the military. The way that people were disrespected, that people in Gwangju and Jeonnam were not treated as normal people by the military, and these were people that I was eating with, talking with, working with every day.


Some of your accounts are quite vivid and detailed. Were your diary entries your main source in remembering what you saw in and around Gwangju from May 14 to 26 in 1980?
Yes, I had a lot of written material and I had photocopied some letters that I had written to friends [from Korea at the time] but I took copious notes every day and I did it for a reason. It was not because I had any academic interest but I did it because it was the only way I could really sleep at night. I was having difficulty falling asleep as [the images of what I saw kept] rolling through my mind. So I felt much better to have it written down. Then I could say, O.K., it’s there, it’s black and white, I can let that memory go, because it’s written down and it’s not completely forgotten. 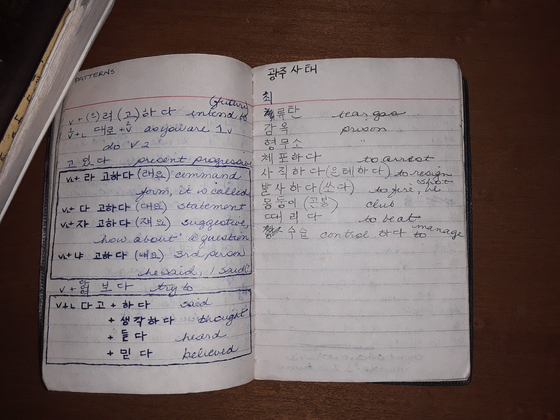 A page out of the notebook that Paul Courtright carried during the May 18 movement in Korea in 1980 show words that he wrote down after he picked them up from speaking with Koreans, such as "tear gas," "club," "beat" and "arrest" in Korean, with English translations. [PAUL COURTRIGHT]

Was there an image or memory that stuck with you more than others?
There were a number. But one moment that I think I will always find difficult to release from my mind is when I was with Robin Moyer [the photographer who was in Gwangju at the time], just after we first met, we were walking into the docheong [provincial office of South Jeolla] and an ambulance comes roaring up and he asked me to go with him to conduct an interview. As the ambulance came, two young men, who were probably two to three years younger than me and likely college students, were taking their friends out of the back. The man [they were carrying] had been killed that evening. Just the look on their faces and the gentleness that they used to carry his body and trying to ask them questions about what had happened, that imagery will probably stay with me forever. 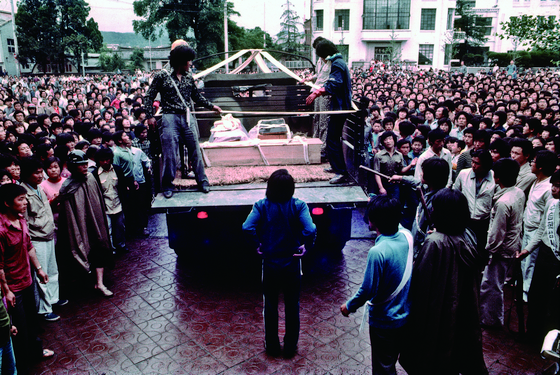 A coffin is loaded on a truck at the provincial office of South Jeolla to be taken for burial in May 1980.[ROBIN MOYER]

Your previous attempt to tell the U.S. government and the rest of the world what you saw was not successful. Do you think that people are ready now to hear more details about what happened?
I think Korea is definitely ready to hear the facts. To talk about the United States, at the present time, no. If we have a different president after November […] I think that the United States would be more ready to have that discussion about what America’s role was, what were America’s failures, what would be the best way to address those policy failures of the past. But at the present time, I don’t see anything coming out of the current administration.


You mention in the book the importance of knowing what happened during the May 18 movement for Korea-U.S. relations. Can you elaborate?
Fact-finding puts everything on the table. Putting everything on the table really helps people appreciate, whatever role that the United States has had, some people will want to hide it, but I think more people will want to explore it and to understand it better. I would say what is most important is that there is still some healing that needs to happen for the people in Gwangju and Jeonnam. They’re still paying. And having that material on the table will help with that healing. If people in the United States can respond and say whatever kind of apology that will obviously help with healing too. So to me, the benefit here is for the people of Gwangju, that is what we should be focusing on. 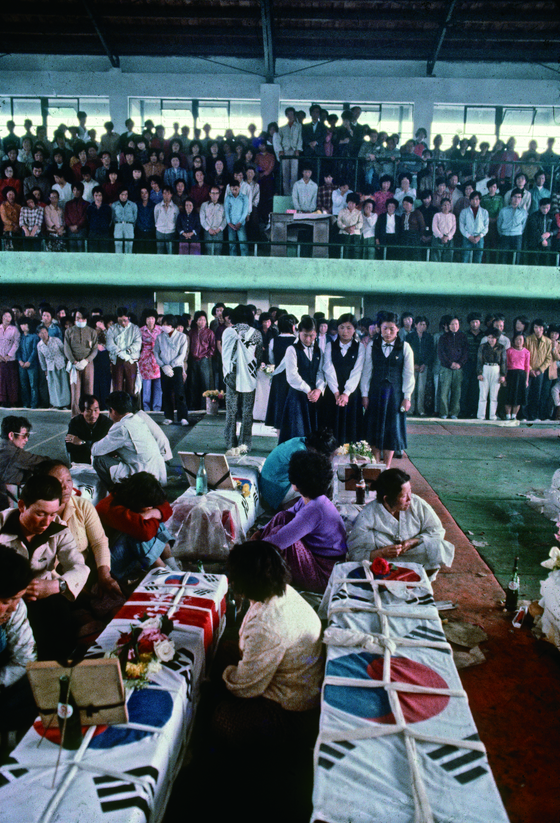 A local gym in Gwangju turned into a mortuary in May 1980. [ROBIN MOYER]

How did you decide to publish the book in both English and Korean?
For decades I wanted to have the time to write the book. [Initially] it was to be a book for Americans. I felt that Americans had very little understanding of 518 [short for May 18 movement] but also the U.S. government’s lack of proper engagement and failures. And I thought it was important for Americans to understand that.
But when I was in Korea last May, and a bunch of my Korean friends said to me that they felt that Korea also needed to hear my story, I was a bit surprised. Why would they want my story? I am a foreigner and this is a Korean event. Their response was that because I am a foreigner, I can give a different perspective.
So I talked with a Korean publisher because that was the only way I was going to get an English and a Korean version. That’s how it all came together.


Your book is also a glimpse into Korean society in the 1980s and many of your anecdotes concern elderly residents, especially halmonis (grandmothers).
To me, it didn’t take long to realize the role of halmonis in society. And it’s a role that grandmothers play in many cultures. I grew up in Iran and Taiwan when I was young so being in other cultures was not unusual to me.
Halmonis are tough. They’re tiny – I’m not particularly tall, but at that point in time in Korea halmonis were tiny little things but they were powerhouses. You could not get away with anything. 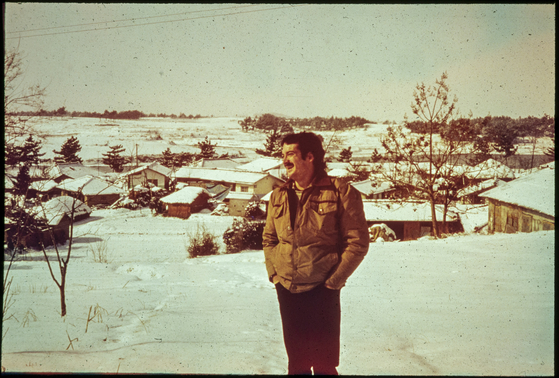 Paul Courtright in Hohyewon, a town in Naju, South Jeolla, where he served as a Peace Corps volunteer. The photo was taken in January 1980. [PAUL COURTRIGHT]