Choe Kang-wook, a presidential aide-turned-lawmaker, on Tuesday faced criticism after demanding that a court stop his trial in the middle of a hearing so that he could attend a press conference.

The court did not accept his demand. 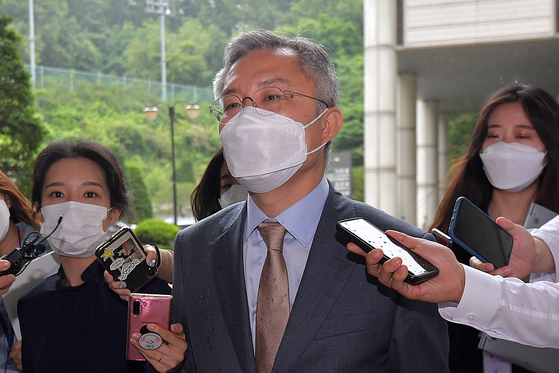 “I have a plan to hold a press conference at the National Assembly. Can you stop today’s hearing here and continue the rest next time? I want your understanding,” Choe, chairman of the Openminjoo Party, said Tuesday morning, about 30 minutes into his trial at the Seoul Central District Court.

Choe, a former presidential secretary for civil service discipline, was indicted earlier this year on charges of issuing fake internship certificates to former Justice Minister Cho Kuk’s son to help his applications to law schools. He was accused of issuing the fake certificates while working as a lawyer in 2017 before joining the Blue House.

Choe was elected as a proportional lawmaker of the Openminjoo in April. Including Choe, the party has three lawmakers.

Choe said he had business to do in the National Assembly and asked Judge Jeong Jong-geon to continue the hearing in his absence. The court was holding an evidentiary hearing at the time.

“According to the Criminal Procedure Act, it is illegal [to hold the hearing without the accused],” Judge Jeong said. “I won’t allow it.”

Choe’s lawyer made repeated requests, but they were all denied.

Choe’s trial started one week after the April 15 general elections. He attended the initial hearing as a lawmaker-elect, and Tuesday’s evidentiary hearing was the first court session that Choe attended as a lawmaker.

“I have never seen such [actions by] an accused person,” said an incumbent judge. “Choe’s attitude is incomprehensible. No ordinary citizen would ever imagine acting like that.”

A prosecutor also criticized Choe. “It is lamentable,” he said. “I am frustrated with his treatment of the judiciary.”

Choe apparently wanted to attend the press conference of the Openminjoo Party, scheduled for Tuesday at 11 a.m. He left the courtroom around 11:20 a.m., after the hearing ended.

“I thought [holding the press conference] to tell the people about the party’s position after the National Assembly opened the session had a higher priority,” Choe told reporters after the hearing.

Choe also rejected criticism that his application to serve the National Assembly’s Legislation and Judiciary Committee is conflict of interest. The committee oversees the Ministry of Justice, Ministry of Government Legislation, Board of Audit and Inspection and Constitutional Court. It has the right to decide their budgets, establish laws governing them and conduct audits.

In an interview with KBS last month, Choe said there is nothing wrong with a lawmaker standing trial while serving in the Legislation and Judiciary Committee.

“There was even a precedent that the committee chair was standing trial,” Choe said at the time.

Asked if his application to serve on the committee was unrelated to his ongoing trial, Choe responded angrily.

“The trial will lay bare the truth,” Choe said. “And I will do my best to serve my roles as the party chairman and a lawmaker.”