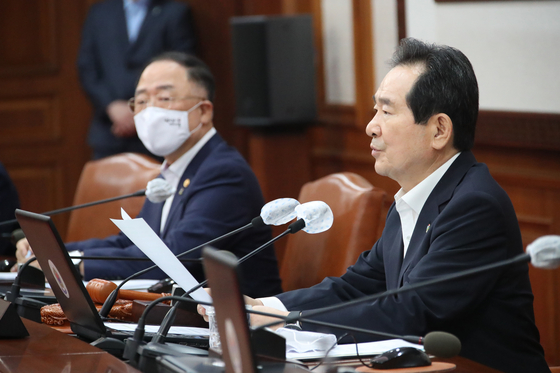 Finance Minister Hong Nam-ki, left, and Prime Minister Chung Sye-kyun in a cabinet meeting in central Seoul on Wednesday where the government announced on the size of the third supplementary budget for this year. [YONHAP]

A supersized supplementary budget was proposed by the government on Wednesday, with the package weighing in at a whopping 35.3 trillion won ($29 billion).


If passed, it will be the largest extra budget ever, beating out the 28.4 billion won under the Lee Myung-bak administration during the global financial crisis of 2009. This is the first time in nearly half a century three such budgets have been proposed in a single year.

The supplementary budget will not only partially fund the support promised to key businesses, including airlines, which have been heavily hit by the coronavirus pandemic, but it will also go toward funding the Korean New Deal.

“Our economy in the first quarter when compared to the previous quarter contracted 1.4 percent, while the number of people employed in April when compared to a year ago fell 476,000,” Hong said, stressing the urgent need for a third extra budget. “The worsening economic conditions and the shock on employment is becoming more real.”

He stressed only when the funding is secured will these measures will be effective.

“These measures can only work when backed with fiscal bullets,” Hong said. “On the ground, companies and shop owners say they need more government support in holding up against the crisis.”

He said government spending is especially important in the second half to prevent continued collapse and larger job losses.

The government plans to submit the proposal to the National Assembly June 4. with hopes that it passes this month. If approved, the goal will be to disburse 75 percent of the funds within the first three months.

The government on Monday issued a growth projection for 2020 of 0.1 percent, down from the previous target of 2.4 percent. The Bank of Korea published a forecast of minus 0.2 percent and on Tuesday suggested a recession, the first since 2003, as it expects a negative quarter-to-quarter growth for the April-June period, following negative growth in the first quarter.

While many in the political community agree with the tapping of national coffers during times of crisis, some are alarmed by the rapid increase in the national debt. 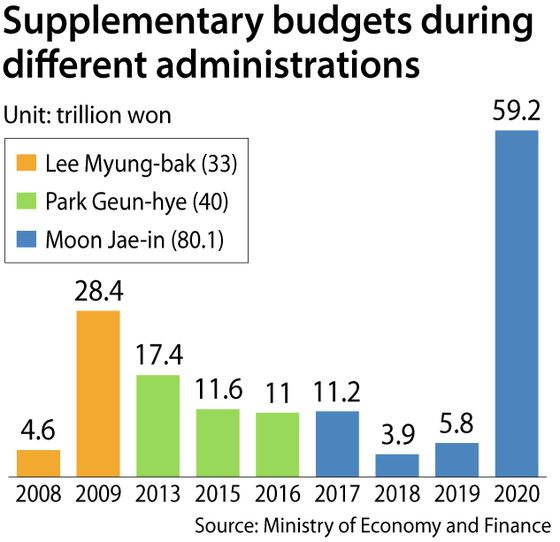 With the tax take shrinking, this fiscal balance minus the four social insurances programs — the national pension, health insurance, workers’ compensation and employment insurance — is expected to hit a record 112.2 trillion won deficit this year. This would be the largest deficit recorded and twice the size of the previous record of 54.4 trillion won, hit last year.

The national debt including that owed by local governments is expected to total 840 trillion won by the end of the year. That’s up nearly 100 trillion won from last year.

The debt-to-GDP ratio for this year is expected to hit an all-time record of 43.5 percent, moving further away from the 40-percent that is considered to be the limit for keeping Korea’s government finance manageable.

But this estimate is based on the assumption that the economy grows at the government’s target, which means it could further increase if that target is missed. If so, Korea could face a larger crisis as the government will be more constrained in terms of funding options.

The finance minister downplayed worries about the growing debt and deficits. He said once the current crisis is managed and economic growth follows, the national fiscal position will improve as more in taxes are collected.