Korea’s main bourse gained more than 2 percent Wednesday, closing at 2,147 after dipping to as low as 1,400 level in March when the coronavirus pandemic rattled the market. [NEWS1]


The main Kospi bourse rallied to gain more than 2 percent on Wednesday as investors bet high on the possible economic recovery spearheaded by a massive supplementary budget and the end of coronavirus lockdowns around the world.

The main index advanced 2.87 percent to close at 2,147, lifting the benchmark to its highest point since Jan. 30, when Korea's daily coronavirus infections were below 20. The Kospi dipped below the psychologically important 2,000 level in March through May as the rapid spread of the coronavirus led to industry-wide shutdowns and falling economic indicators.

The rebound took a cue from strong indexes from the United States overnight on top of the government’s announcement of the largest ever additional budget, at 35.3 trillion won ($29 billion), to stimulate the economy dented by the pandemic. 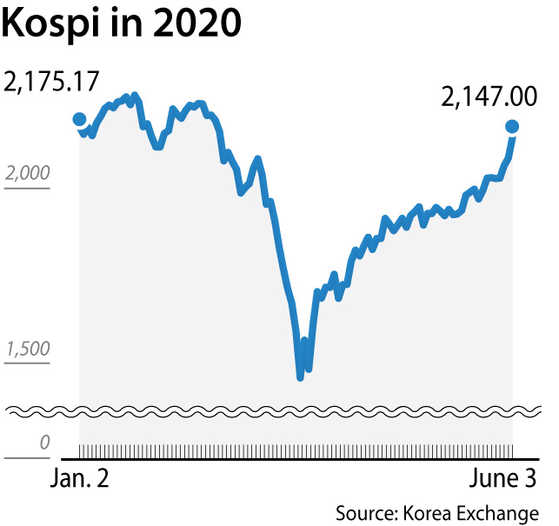 With institutional and foreign investors on a buying spree, transactions on the Kospi hit an all-time high of 1.12 billion shares, worth 16.8 trillion won.

Financials and chip giants Samsung Electronics and SK hynix led the rally, backed by the optimistic prospects of the industry.

The major semiconductor players have proved resilient to the coronavirus since the virus helped boost demand for chips used for servers to cater to the growing number of people working from and entertaining at home.

Exports of semiconductors increased 7.1 percent in May, the first increase in 18 months, despite a series of gloomy prospects for the industry.

Gartner in March projected sales in the semiconductor industry would shrink 0.9 percent this year from its earlier projection of 12.5 percent growth, while IHS Markit adjusted its growth from 5.5 percent to 2.5 percent.

Lee Soo-bin, an analyst at Daishin Securities, said that the price of server dynamic random-access memory (DRAM) chips will likely grow 24 percent in the second quarter compared to the previous quarter thanks to strong demand from cloud service providers.

The banking and securities sectors typically become gainers when a government stimulus package is announced because the injection means more liquidity and transactions.

Still, internet companies Kakao and Naver were on the losing side, shedding more than 3 percent after a rally in recent months, with expectations for IT services to replace a wide range of human-to-human services.