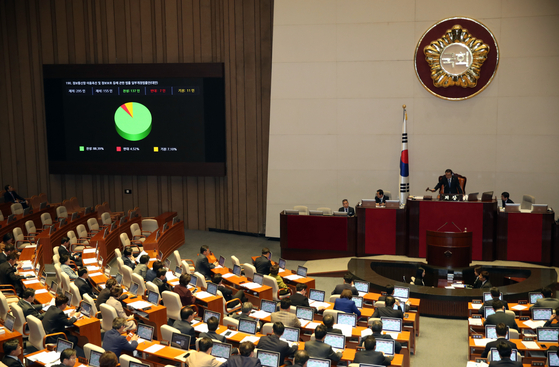 The National Assembly on Jan. 9 approves data reform legislation that relaxed restrictions on access and utilization of personal information considered to have held back the development of innovative services and products. [YONHAP]


With two months left before the official launching of MyData, a preliminary government survey has found huge interest not only from major commercial banks, but also the three major telecommunication companies — SK Telecom, KT and LG U+, leading IT companies such as Naver and Kakao and start-ups such as leading fintech company Toss.

MyData is a government-led project that gives businesses access to customer information.

According to the Financial Services Commission on Wednesday, 116 companies have shown interest in getting government approval to launch MyData services in a survey conducted between May 14 and May 28.

Among those that have expressed an interest, the majority are financial companies including banks, insurance companies and credit card issuers, at 47 percent.

The FSC in a statement said there were a wide variety of industries, not only finance but also IT, telecommunications and even retail that expressed an interest.

MyData is considered a major goldmine for businesses.

MyData allows customers to manage personal financial information that is spread among different financial institutions, from different bank accounts to insurance and credit card payments as well as stock investment and loan balance under a single app.

According to the FSC statement, customers will be able to access customized services including information management, wealth management and credit management whenever and wherever at a reason price.

It added that MyData will revolutionize local financial services, making them consumer-centric, rather than geared toward companies, by allowing clients to easily compare and choose services and products by preference.

MyData, which has become legally viable thanks to the reform bills that relax rules about handling personal information approved by the National Assembly in January, will officially launch on Aug. 5.

Once approved by the government, even a non-financial company will have access to the vital financial information of customers, which was previously exclusively limited to financial companies.

It will provide essential information such as a person’s spending habits and interest that allows companies to design customized services and products.

Even small players will be able to offer competitive services and products, fueling competition in the industry.

The government in 2018 announced the plan to expand the local data market into a 10 trillion won ($8.2 billion) industry. At the time it was worth 6.3 trillion won.

Ban on short selling to be partially lifted next week