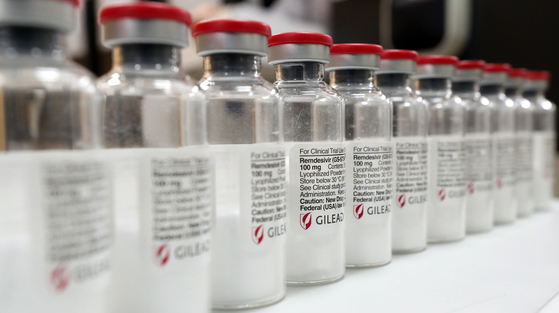 Remdesivir, the antiviral drug that may be effective in the treatment of Covid-19, has been approved for emergency use by the Ministry of Food and Drug Safety.

The ministry said Wednesday it will do "its best to import the treatment as soon as possible” in cooperation with Gilead Sciences Korea, the local office and importer for Foster City, California-based Gilead Sciences, which developed remdesivir. Details on when and how much of the treatment will land in the country have yet to be decided.

Only patients with severe symptoms will be eligible to receive the drug, such as those already receiving oxygen therapy.

Under normal circumstances, a drug importer would submit an application for an import permit to the Ministry of Food and Drug Safety, then submit documents and clinical trial results required in the screening process.

The approval for remdesivir happened the other way around, as it was a government office that requested the Drug Ministry to grant a fast-track permission for the antiviral treatment. This route is legal under Korea’s Pharmaceutical Affairs Act, which allows exceptions for drug importation in case of national emergencies.

The Drug Ministry’s approval comes after the Korea Centers for Disease Control and Prevention (KCDC) called for the use of remdesivir Thursday.

“Our decision was based on the judgment that remdesivir’s effect in reducing recovery time for severe Covid-19 patients had clinical significance, not to mention we’re still in need of securing additional supply for applicable treatments,” the Food and Drug Ministry said in a statement Wednesday. “It was also considered that the United States, Japan and Britain have permitted the use of remdesivir in the Covid-19 pandemic.”

On April 29, the U.S. National Institutes of Health (NIH) announced that patients who received remdesivir had 31 percent faster time to recovery than those who received a placebo. It reduced the average recovery time from 15 to 11 days, and the mortality rate from 11.9 to 7.1 percent.

Following the NIH’s announcement, remdesivir was authorized for emergency use in the United States, Japan, Britain, Taiwan and India. Now that Korea has joined the list, the next question is: How much volume will the government be able to secure from the U.S. pharmaceutical company?

According to Gilead Sciences, the company aims to produce remdesivir for more than 500,000 patients by October and 1 million by December, assuming one patient undergoes a 10-day course of treatment.

As of Wednesday, the number of confirmed Covid-19 cases in the United States alone stood at 1.8 million, with the worldwide count at 6.2 million.

The fatality rate in Korea has been relatively low. On Wednesday, the number of Covid-19 patients with severe symptoms in the country was three. KCDC Director Jung Eun-Kyeong said in a Friday briefing that the immediate domestic demand for remdesivir was not large. The request for the import permit was a measure to prepare in advance for a possible widespread infection in the future

The focus is "on countries that actually need injections for patients rather than for stock, so we’ll have to push to secure volume,” Jung said Friday.