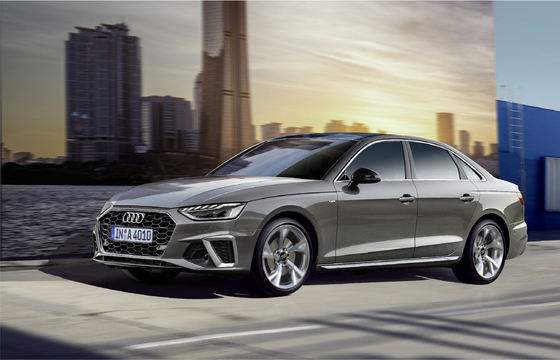 Audi Korea launched the face-lifted version of the A4 compact sedan on Wednesday. [AUDI KOREA]


Audi Korea launched face-lifted versions of two sedans — the A4 and A5 — on Wednesday in its continuous effort to regain its foothold in the local market.

The newly launched A4 compact sedan is a partially revamped version of the fifth generation model that launched in Korea in 2016. It comes in four engine options, two V4 TFSI gasoline engine varieties and two with V4 TDI diesel engines.

Incorporating Audi’s latest design language, the new A4’s exterior has gotten sleeker, according to the carmaker, with a major update to its grille topped with the carmaker's signature honeycomb pattern and more densely sequenced LED lights in its headlights and taillights.

The A5 Coupe, which is an upgrade of the second generation that launched in Korea last year, will come in four engine options — three petrol and one diesel.

Audi Korea has been gradually recovering its sales this year after almost completely dropping out of the local market along with its affiliate Volkswagen since its diesel engine scandal back in 2015.

According to Korea Automobile Importers and Distributors Association data Wednesday, Audi’s sales put it in the third spot as of May, selling 6,670 vehicles, accounting for 6.6 percent of the import car market share in Korea. Its market share stood at 2.8 percent last year over the same period.

Audi has been releasing new models since the latter half of last year, including the fully revamped Q3 compact SUV in May.

The local unit of Audi held the launch event online on Wednesday evening due to the coronavirus pandemic.

The two models go on sale in Korea on Thursday.

audi audi korea a4 a5 diesel