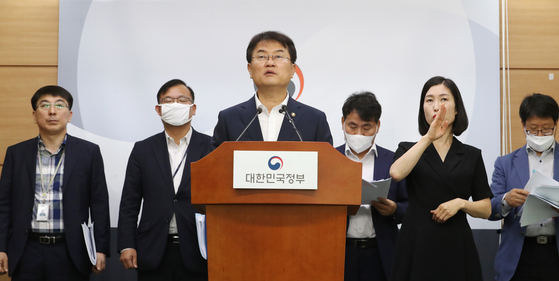 Vice Minister of Interior and Safety Yoon Jong-in announces that the Korea Centers for Disease Control and Prevention (KCDC) will be upgraded to become an independent administration in a briefing at the Sejong government complex on Wednesday. [YONHAP]

The government announced Wednesday it will upgrade the Korea Centers for Disease Control and Prevention (KCDC) to an independent administration, a move aimed at strengthening the country’s comprehensive response to infectious diseases.

The Ministry of the Interior and Safety said that the KCDC, currently within the Ministry of Health and Welfare, will be renamed the Disease Control and Prevention Administration. The move technically requires an amendment to the Government Organization Act, but the bill is expected to easily pass the National Assembly.

As an independent administrative body, the agency will be able to set and implement policies related to infectious diseases and will have control over budgetary and organizational matters and the hiring of personnel and experts.

The KCDC, currently headed by Director Jung Eung-kyeong, has been tasked with Covid-19 quarantine measures during the pandemic and providing daily briefings to the public since the outbreak began.

“We hope to make a safer Republic of Korea by strengthening the public health and medical systems and infectious disease response capabilities," Vice Minister of Interior and Safety Yoon Jong-in said during a Wednesday briefing.

But in the process of carrying out quarantine measures, the agency has faced difficulties setting long-term policies and has suffered from a shortage of personnel.

Becoming its own administrative agency will enable the KCDC to bolster its identity and expertise while more efficiently carrying out research and development.

President Moon Jae-in previously vowed to elevate the KCDC to an independent administration in his May 10 address marking his third anniversary in office.

Regional centers for disease control will also be established to strengthen quarantine abilities at the local level, including capacity to perform contact tracing amid a prolonged coronavirus pandemic.

“We have determined that the first response happening at the local government is most effective in preventing the community transmission of infectious diseases," Vice Minister Yoon said.

The KCDC currently has a quota of 907 personnel and a budget of 817.1 billion won ($671.4 million). It's expected to increase its workforce once it separates from the Health Ministry.

Yoon asked for cooperation from the National Assembly to pass the Government Organization Act amendment speedily.

The Interior Ministry plans to submit the revised bill to the National Assembly in mid-June, and the new independent Disease Control and Prevention Administration is expected to launch as soon as the law is implemented.