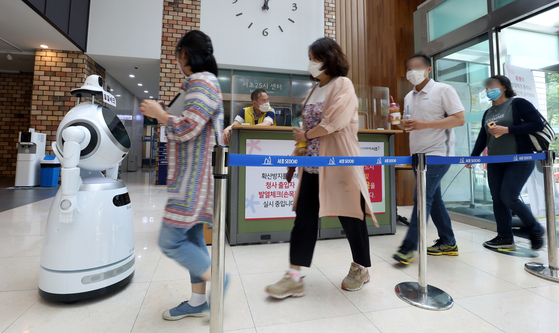 An artificial intelligence robot at the Seocho District Office in southern Seoul checks visitors' temperatures Thursday to look for signs of Covid-19 infection. The robot is also able to detect whether people are wearing their face masks correctly and give out audible instructions for those who aren't. [NEWS1]

At least 12 new Covid-19 cases have been traced to a health care company in southern Seoul, health authorities announced Thursday, adding another cluster in the Seoul metropolitan area.

The healthcare company, Richway, is located in Jowon-dong, Gwanak District, near Guro Digital Complex Station and Sindaebang Station on Seoul subway line No. 2.

Confirmed cases linked to the company include patients from multiple parts of Seoul, the surrounding province of Gyeonggi and Incheon, officials said — the three main areas that have been grappling with several clusters lately. Most of the recent clusters appear to be linked to an outbreak of cases from clubs and bars in Itaewon-dong, central Seoul, early last month.

But authorities have yet to draw a clear connection between Richway and the Itaewon outbreak, saying Thursday that contact tracing was ongoing.

The company caters mostly to the elderly and runs seminars and events for them, officials said, offering health guidelines, introducing them to products and providing entertainment such as recreational activities.

A 72-year-old man who works for the company and lives in Guro District, western Seoul, was diagnosed with Covid-19 Tuesday, prompting health authorities to contact his coworkers and the people they had close contact with to inform them of possible exposure to the virus. More infections were confirmed in the following days.

By Thursday, at least 12 people linked to the healthcare company had tested positive for the coronavirus. Seoul health officials advised anyone who visited Richway recently to visit a nearby Covid-19 testing center for examination.

Na Baeg-ju, director general of the Seoul Metropolitan Government’s Citizens’ Health Bureau, said Thursday in a press briefing that officials have secured a full list of participants at the company’s recent events, adding that the majority were elders. Testing was being administered on 188 people who visited the office from May 22 to June 1, along with the company’s 11 employees, Na added.

Health officials expressed particular concern with the latest cluster, as most infections have been confirmed among senior citizens, who have the highest fatality rate among Covid-19 patients. 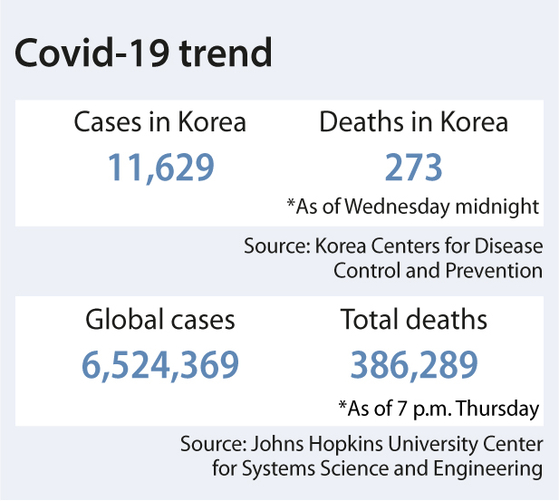 The Korea Centers for Disease Control and Prevention (KCDC) announced Thursday morning that 39 new Covid-19 cases were detected across the nation Wednesday. All but six of them were domestic cases, and they were all located in the Seoul metropolitan area: 13 in Seoul, 13 in Gyeonggi and seven in Incheon.

Korea’s total case load now stands at 11,629. By Wednesday midnight, 273 people had died, the same as the day before, while 10,499 people had been declared fully recovered, up by 32 from the previous day.

Two clusters that emerged earlier this week from numerous Protestant churches in the Seoul metropolitan area increased the most steeply, according to the KCDC’s daily statistics.

The one traced to a string of small, new churches, mostly in Incheon, grew by 11 cases to reach a total of 66 cases: 38 in Incheon, 18 in Seoul and 10 in Gyeonggi. Another cluster from several churches in Anyang and Gunpo, both in Gyeonggi, rose by three to arrive at a total of 18 cases.

An earlier cluster that arose late last month from a Korean e-commerce company’s distribution center in Bucheon, Gyeonggi, rose by a single case to reach 120, while another cluster surrounding a Protestant missionary group of Korean college students rose by one case to 11. An office of KB Life Insurance in Jung District, central Seoul, has also added one new case, reaching a total of 12.