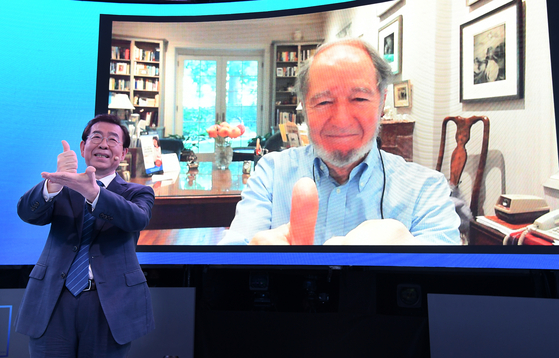 The Covid-19 pandemic has offered the world a lesson in the importance of thinking together on worldwide issues, rather than competing against one another for more power, Pulitzer Prize-winning author Jared Diamond told the mayor of Seoul during a teleconference broadcast online Thursday morning.

Diamond, a geography professor at the University of California, Los Angeles, known for his 1997 book “Guns, Germs and Steel,” and Seoul Mayor Park Won-soon held a one-on-one discussion for 90 minutes that focused on Covid-19 and how the world can more effectively deal with similar outbreaks in the future.

The meeting was the highlight of the Cities Against Covid-19 (CAC) Global Summit 2020, a weeklong event hosted by the Seoul Metropolitan Government, which since Monday has virtually invited worldwide leaders and experts to discuss the coronavirus. The conference includes 15 sessions streamed live on the Seoul government’s official Korean and English-language YouTube channels.

Panelists who live in Korea have been invited to a makeshift studio at Seoul City Hall in Jung District, central Seoul, while other panelists who live outside the nation have participated virtually from their homes or offices. No spectators have been allowed in the studio to limit the possibility of coronavirus transmissions.

Diamond spoke from his home in Los Angeles while Park spoke from the makeshift studio in Seoul.

The best-seller author said that the biggest change for the world during the Covid-19 pandemic is that “for the first time in world history,” the world is “facing a global problem that is being recognized as a global problem.”

That's in contrast to the issue of climate change, he noted, as countries haven't recognized it as a “common enemy," partly because climate change is killing people over a longer period of time, making it difficult to pinpoint climate change as the direct cause of the death.

Whereas when someone is infected with the coronavirus, they can die within the next few days, he mentioned.

A core lesson from the pandemic is to “end discussion about competition between different parts of the world for power and to create discussion that the whole world, as we say, sink or swim together," Diamond stressed.

Diamond warned, "If we don't work together, we will all fail together."

To prevent other infectious diseases from causing future pandemics, the geography professor strongly suggested wild animal markets, the bush meat trade and the traditional medicine trade to be entirely shut down. Those markets have played a large role in allowing pathogens to jump from animals to humans, causing infectious diseases including Covid-19.

Park proudly pointed to the fact that only four coronavirus-related deaths have occurred in his city of about 10 million, crediting Seoul citizens for taking the lead in virus containment by following government guidelines on sanitation.

Diamond replied that America’s delayed response has cost the nation several tens of thousands of deaths, and that one key difference he noticed between Koreans and Americans was that Koreans are “willing to cooperate and accept direction from the government,” whereas Americans are at the “opposite extreme” and do not accept advice from authorities.

More information about the Cities Against Covid-19 Global Summit 2020, which ends Friday, can be found on the Seoul government’s official English website of the city’s Covid-19 responses, www.english.seoul.go.kr/covid/