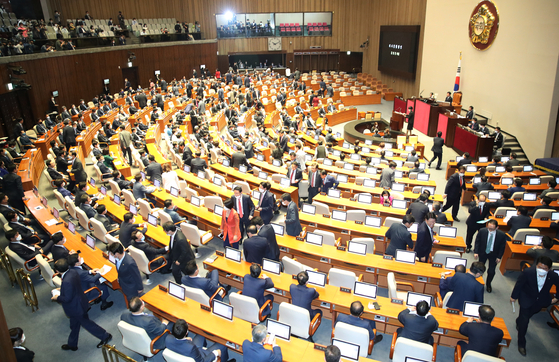 United Future Party lawmakers walk out of a National Assembly session on Friday to protest the ruling Democratic Party's operation of the legislature. [YONHAP]

Lawmakers of the 21st National Assembly elected a new speaker on Friday, but the main opposition party walked out of the meeting to protest the ruling party's recent moves that have broken with tradition to increase its power over the legislature.

Representatives from both the ruling Democratic Party (DP) and opposition parties attended the first session of the new National Assembly at 10 a.m., as scheduled. Lawmakers from the opposition United Future Party (UFP), however, walked out from the session after their floor leader, Rep. Joo Ho-young, made a brief address to condemn the DP for demanding to head all standing committees based on its overwhelming majority.

“I want to state clearly that today’s session is unlawful,” Joo said Friday, noting that the UFP had never agreed to the meeting. “We came here to point that out and protest, not to validate it.” 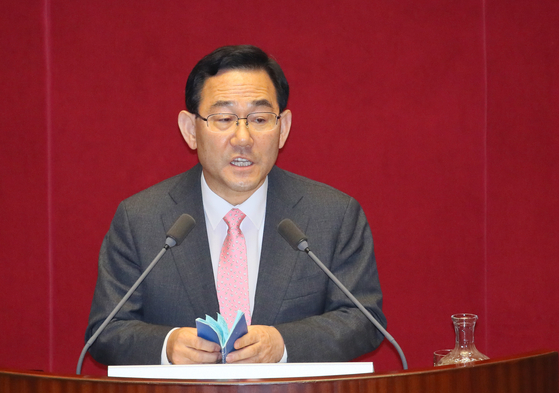 Since late May, the DP and the UFP have been negotiating over who will chair the 18 standing committees of the new National Assembly. The talks, however, have repeatedly broken down, with the DP insisting that it will chair all 18 committees. The UFP proposed that the DP will chair 11 committees while it will chair seven, proportional to the number of lawmakers they each have, but the DP called the suggestion “delusional.”

While the National Assembly Act says heads of the standing committees are supposed to be elected at a plenary session, the ruling and opposition parties established a tradition after the country’s democratization in 1987 that the posts would be split based on the number of lawmakers from each party. The Legislation and Judiciary Committee, the final gatekeeper of all bills before voting, is traditionally headed by the largest opposition party.

Joo told lawmakers on Friday that the tradition was started by the late President Kim Dae-jung, a liberal statesman closely aligned with the present-day DP.

“I want to remind the DP that the tradition was established at the request of the late President Kim Dae-jung when he was leading the Peace Democratic Party [in 1987],” Joo said. “And we all respected it until now."

Joo told the assembly that he considers opposition parties to be one of the legislature's defining traits.

“I want to stress clearly that the ruling party’s attitude to railroad everything just because it has 177 seats won’t allow the smooth operation of the legislature," Joo said. "It will also go against the people’s expectations to resolve the national crisis through political cooperation.”

Joo said the DP, although it won 177 seats, must remember that 42 percent of the people still voted for the UFP in the general elections.

“We are ready to cooperate,” Joo said. “But if the DP ignores the 42 percent of the voters and highhandedly operates the legislature, we will never allow it.”

After Joo ended his remarks, all UFP lawmakers applauded, stood up and left the main chamber.

In the absence of the UFP, 193 lawmakers including those from the DP, Justice Party, People’s Party and Openminjoo Party elected DP’s Rep. Park Byeong-seug as the new National Assembly speaker. He received 191 votes. 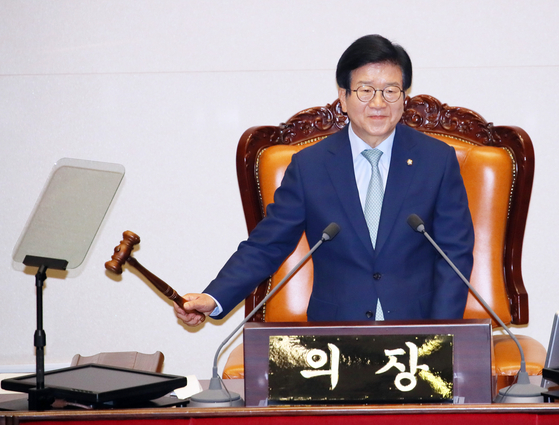 It's the first time since 1967 that the legislature elected a speaker without the participation of the largest opposition party.

Park will remain independent while serving as the speaker for two years.

Lawmakers also elected DP Rep. Kim Sang-hee as deputy speaker, the first woman to serve in that position. Another deputy speaker, supposed to be an opposition lawmaker, was not elected Friday.

The DP and the UFP are expected to continue their negotiations on the standing committee heads. The legal deadline is Monday.