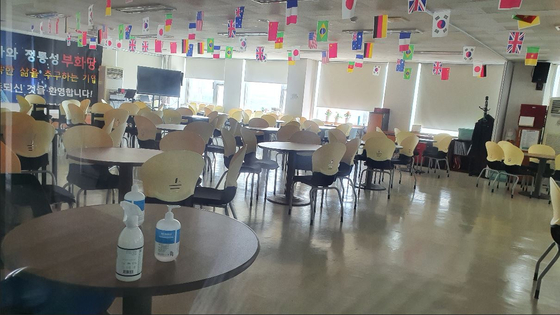 A recreational hall at health care company Richway in Gwanak District, southern Seoul, on Thursday, where the company held events for elderly customers. At least 29 Covid-19 patients have been traced to the company. [PYUN GWANG-HYUN]

A new cluster of coronavirus infections at a health care company in Gwanak District, southern Seoul, has more than doubled in size, health authorities said Friday.

The Korea Centers for Disease Control and Prevention (KCDC) announced Friday morning that Seoul’s latest hot spot has grown to at least 29 Covid-19 patients after 19 people were diagnosed Thursday alone in connection to the company, named Richway, which sells health care products.

The patients in the cluster mostly live in Seoul, Incheon or the surrounding province of Gyeonggi, and include Richway employees, their customers and the people they had contact with, health officials said.

Richway is known to have run marketing seminars for the elderly, offering health guidelines, introducing them to their products and providing entertainment such as recreational activities. Some customers appeared to have been infected at such events.

A 72-year-old man who works for the company and lives in Guro District, western Seoul, was the first person to have been diagnosed with Covid-19 in the cluster. He received his positive test result last Tuesday. Contact tracing was conducted and several more infections were confirmed in the following days.

Among the cluster’s 29 patients, 18 live in Seoul, five in Gyeonggi, four in Incheon and two in South Chungcheong, according to KCDC statistics.

Nationwide, the KCDC said 39 people were diagnosed with Covid-19 on Thursday, all but five of which were domestic cases. Of the 34 domestic cases, 15 live in Seoul, 10 in Gyeonggi, six in Incheon and one each in Daegu, South Chungcheong and North Gyeongsang.

By Thursday midnight, 273 people had died, the same as the day before, while 10,506 people had been declared fully recovered, up by seven from the previous day.

Another cluster that arose earlier this week traced to a string of small Protestant churches, mostly in Incheon, grew by 10 cases Thursday to reach a total of 76. Of those infections, 30 are church members and 46 are people they contacted. Twenty live in Seoul, 42 in Incheon and 14 in Gyeonggi.

A hot spot at the Korean e-commerce company Coupang’s distribution center in Bucheon, Gyeonggi, which was first discovered in late May, grew by four cases Thursday to reach a total of 124 cases. All four new cases were people who had contact with Coupang workers.

In a Friday press briefing, KCDC Director Jung Eun-kyeong expressed worry about the latest cluster affecting mostly senior citizens, who have the highest fatality rate among Covid-19 patients, saying it was important to prevent the virus from reaching the most vulnerable groups of the sick and old.

For parents, the recent clusters add another worry about the safety of their children as a fourth and last batch of students prepare to go to school for the first since the pandemic erupted. Nationwide, fifth, sixth and seventh graders are scheduled to resume in-person classes on Monday if everything goes as planned.

Since mid-May, Korean students have been returning to classes gradually, and some schools located in or around clusters have temporarily shut down after their reopenings out of fear their students may come down with Covid-19. The Ministry of Education said Friday that 514 schools, mostly in the Seoul metropolitan area, were closed that day, which make up about 2.5 percent of total schools throughout the country.

At least eight cases of coronavirus infections were detected among school faculty members and students who returned to school since May 20 when the first batch went back, but none of these cases caused any secondary infections on school premises, the ministry said earlier this week.