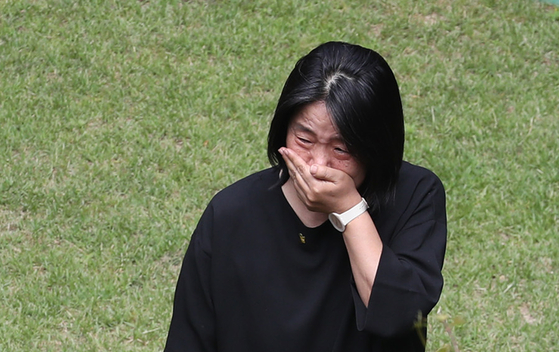 Democratic Party Rep. Yoon Mee-hyang is seen in tears at the Peaceful Our Home in Mapo District, western Seoul, Sunday after news of the death of the head of the shelter for comfort women victims run the Korean Council. [YONHAP]

The head of a shelter for Japanese wartime sexual slavery survivors run by a civic group under a prosecution probe was found dead in her apartment in Paju, Gyeonggi, Sunday, said police Sunday.

Sohn, the 60-year-old head of the Peaceful Our Home located in Mapo District, western Seoul, was found dead Saturday night at 10:35 p.m. in the bathroom nearest to the entrance of her fourth-floor apartment, according to the Paju police precinct.

The shelter is run by the Korean Council for Justice and Remembrance for the Issues of Military Sexual Slavery by Japan, which had been undergoing a probe by the prosecution for allegations of accounting fraud and misuse of donations.

Prosecutors raided the Korean Council’s office, its museum and the shelter for the so-called comfort women victims on May 20 and 21.

Sohn’s acquaintances contacted police Saturday afternoon when she couldn’t be reached. She was already dead when police discovered her.

Police said that there was no evidence of an intruder into Sohn’s home and that her death was not being treated as suspicious.

A police official said that based on the circumstances, Sohn’s death is highly likely to be a suicide.

Sohn had lived alone in her Paju apartment, according to police. CCTV footage showed Song last returning to her apartment by herself. There was no note found at the site.

Sohn was said to have told people around her that she was going through a difficult time because of the investigation and the prosecution raid of the shelter.

Peaceful Our Home was established in 2012 as a shelter for the elderly surviving victims of the Japanese military’s forceful recruitment of tens of thousands of young women before and during World War II, euphemistically referred to as “comfort women.”

Prosecutors last month launched an investigation into the Korean Council after Lee Yong-soo, a comfort woman survivor, in a press conference in early May questioned the financial transparency of the civic group and its former head Yoon Mee-hyang.

The Seoul Western District Prosecutors’ Office in a statement Sunday said, “We express our deepest condolences for the death of the head of Peaceful Our Home.” The statement went onto deny, however, that prosecutors had questioned Sohn or that they had summoned her.

It added that the prosecutors “are also confirming the details of the sudden news.”

Police said that it will conduct an autopsy on Sohn to find the exact cause of her death upon the request of her bereaved family members.

One neighbor told the JoongAng Ilbo on Sunday that Sohn’s apartment hadn’t been seen lit for over a year and that the house had seemed empty.

Rep. Yoon of the ruling Democratic Party (DP) was spotted in tears after arriving at the Peaceful Our Home shelter in Mapo District Sunday morning. Several staffers of the Korean Council and bereaved family members were seen gathered at the shelter after the news of Sohn’s death.

Yoon was elected as a proportional representative for the DP in April and took her seat in the National Assembly starting her four-year term at the end of last month.

Yoon shared on her Facebook account late Saturday an old post from last year which described that when they first met, Sohn said she was okay with working for little pay, around 800,000 won ($665) monthly, “to work together for a good cause.”

The post went onto state that Sohn’s efforts at the Peaceful Our Home and dedication to lifting up the elderly victims “provided great energy to our movement.” Yoon later deleted the post.

Yoon and Sohn’s relationship dates back to 2004.

Sohn began living with the comfort women victims in their old residence in Chungjeongno, central Seoul, in May 2004, helping them with day-to-day tasks.

The Peaceful Our Home in Yeonnam-dong, Mapo District, was leased free of charge by Myungsung Presbyterian Church in 2012, and comfort women victims Kim Bok-dong, Lee Soon-deok and Gil Won-ok lived there. Lee died in April 2017 and Kim in January 2019. Only Gil remains.

The Mapo shelter address has been registered under Yoon’s name. The Korean Council has explained that this is to take into consideration having to file for a death report should a victim pass away, and that Yoon has nothing to gain by being registered to this address.

A house in Anseong, Gyeonggi was purchased by the Korean Council in 2013 for 750 million won, much more than the price of comparable properties in the area. It was purchased with 10 billion won donated by Hyundai Heavy Industries at the time to build a facility for comfort women survivors. The Korean Council eventually sold the property for 420 million won on April 24. This house in Anseong was revealed to have been managed by Yoon’s father and used for purposes other than originally intended.

Prosecutors searched Peaceful Our Home on May 21 believing some accounting books were kept there instead of the council’s main office. 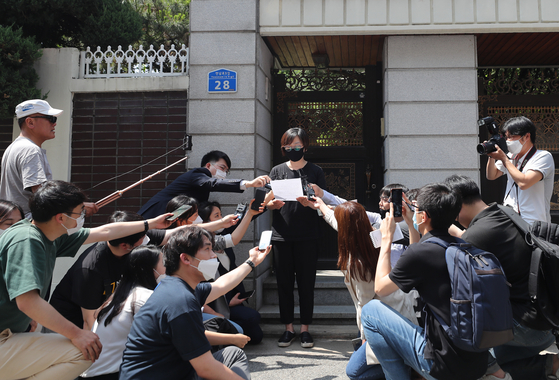 Lee Na-young, president of the Korean Council, reads a statement Sunday afternoon in front of Peaceful Our Home in Mapo District, western Seoul, following the death of the head of the shelter for comfort women victims. [YONHAP]

Lee Na-young, president of the Korean Council, said in a statement Sunday afternoon in front of Peaceful Our Home that the late Sohn since 2004 had, “put her own personal life on the back burner and prioritized the health and safety of the elderly victims.”

Lee added, “She had difficulty accepting the situation surrounding the Korean Council. She especially expressed that she felt as if her entire existence has been negated after the prosecution's sudden raid on Peaceful Our Home and that she was in a psychologically difficult situation.”

Lee went onto urge against “unnecessary attention and speculation on one who spent her whole life committed to the victims.”

A DP spokesman in a statement Sunday expressed “condolences” for the death of Sohn, but added it had no other position to state.

Kwak Sang-do, a two-term lawmaker of the main opposition United Future Party who heads the party’s task force looking into the allegations against the council, told the JoongAng Ilbo over the phone Sunday, “It is a pity that the wrong person seems to be taking responsibility [...] Rep. Yoon and the DP have to show that they are taking responsibility rather than blaming someone else.”

The initial whistleblower, Lee Yong-soo, attended a memorial ceremony for the comfort women victims at the Heeum Museum of Military Sexual Slavery by Japan in Daegu Saturday, and maintained her position that comfort women victims had been exploited by the Korean Council. Lee held two press conferences in Daegu last month in order to question the finances and integrity of the Korean Council and Yoon.

Remembering the late comfort women victims, she called them “sisters” and swore, “I will seek revenge till the end.”

She went onto pledge to make the museum “a respectable education center” and to “definitely seek an apology and receive compensation for the comfort women issue.”