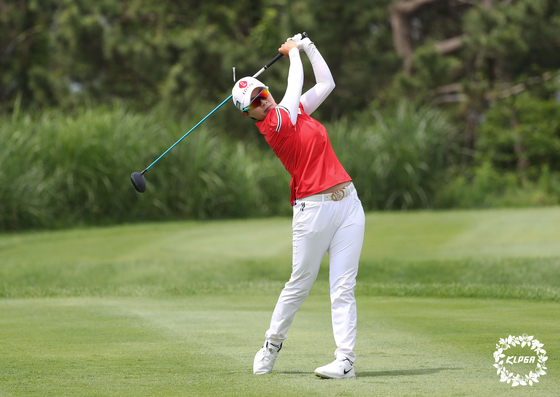 Kim Hyo-joo hits her tee shot during the final round of the 10th Lotte Cantata Ladies Open at Sky Hill Jeju Country Club in Jeju Island on Sunday. [KLPGA]

Rather than the last group, which is comprised of the top three players in the tournament so far, the group ahead of them, composed of Kim Hyo-joo, Kim Sei-young and Park Min-ji, proved to be the most competitive on the final day.

Kim Hyo-joo, who started the final round three shots behind the leader Hong Ran, didn’t get off to the best start as she made a bogey on the par-4 first. While it seemed like she was falling out of contention, Kim made her way up the leaderboard with three back-to-back birdies from the par-3 fifth to the par-4 seventh.

The lead moved between world No. 6 Kim Sei-young, Kim Hyo-joo and the KLPGA's Oh Ji-hyun as the players moved through the back nine, before finally coming down to the two Kims on the final hole.

Both Kims finished the par-5 18th with birdies, finishing the tournament at 18 under par. Both Kims had a final round of five under par, 67, with Kim Hyo-joo reaching the magic number with seven birdies and two bogeys, while Kim Sei-young had six birdies and a bogey.

Oh, who played in the final group, missed out on the sudden-death playoff, making a par on the par-5 18th.

Due to this, it came down to two LPGA Tour players.

Playing the 18th hole as their first sudden-death playoff hole, both Kims hit the fairway. They went on to both miss the green — Kim Hyo-joo hitting slightly to the left, as she did the first time they played the hole, and Kim Sei-young falling short.


Despite Kim Sei-young having a shorter birdie putt, she missed hers, and Kim Hyo-joo came through to take the title. 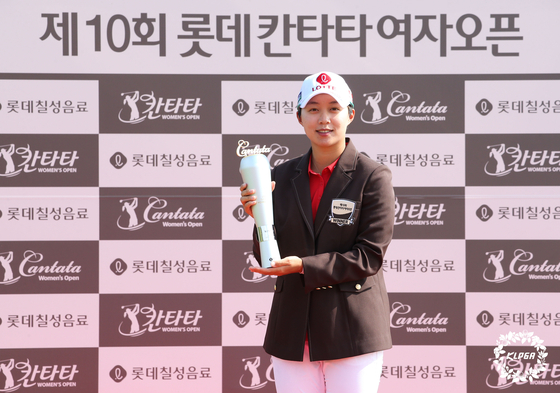 Kim Hyo-joo poses for a photo with the trophy after winning the 10th Lotte Cantata Ladies Open in Jeju Island on Sunday. [KLPGA]

Following her victory, Kim didn’t forget to thank her fans who have been supporting her from a distance.

This victory is also meaningful for Kim Hyo-joo as it came on the same course where she picked up her very first win on the KLPGA Tour back at the 2012 Lotte Mart Women’s Open, where she won as an amateur.

Excluding her win as an amateur, this win also marks her 10th victory on the KLPGA Tour. This is also a long-awaited win for Kim, as she hasn’t picked up a trophy since December 2016. With the win, Kim took home the prize money of 160 million won ($133,000).

Kim is one of the players who has joined the LPGA Tour after an impressive career on the KLPGA Tour. As an amateur, Kim won the Lotte Mart Women's Open in April 2012, the Suntory Ladies Open, an LPGA of Japan event, in June 2012, and the Swinging Skirts Taiwanese TLPGA Open, an LPGA of Taiwan event, in September 2012. Following an outstanding amateur career, Kim turned pro that year.

Kim went on to dominate the KLPGA Tour, where she has picked up 10 wins including Sunday’s victory.

Her career continued on quite a streak. In 2014, Kim made her first major appearance at the Evian Championship on the LPGA Tour. Not only did she win, but she also set the record for the lowest 18-hole score ever at a major, with a 61 on the first round.

By winning the tournament at 11 under par, one shot ahead of Karrie Webb of Australia, Kim was given an LPGA Tour card for 2015 and started her career in the United States. In her rookie season on the LPGA Tour, Kim wasted no time picking up her first win as she won the JTBC Founders Cup in March, which was only her third LPGA Tour event of the season.

Although that was her only win of the season, Kim got off to a quick start in her sophomore year by picking up a win at the Pure Silk-Bahamas LPGA Classic in Jan. 2016. That year, Kim picked up another win on the KLPGA Tour in December at the Hyundai China Ladies Open, but since then, Kim has struggled to find a win.

She still has been a consistent player, managing to record a number of top-10 and even top-five finishes, but when it came to wins, Kim always fell short.

Even at the 2018 U.S. Women’s Open, Kim had to walk away with a runner-up finish by losing in the fourth playoff hole to Ariya Jutanugarn of Thailand.

But a victory on Sunday has finally ended her winless drought. Now Kim has won a total of 16 tournaments across the LPGA, KLPGA, Japanese and Taiwanese tours.

As for the KLPGA Tour, Kim says that she plans on competing until the Kia Motors The 34th Korea Women’s Open Golf Championship, which starts from June 18 to 21, as the LPGA Tour still hasn’t announced a specific re-start date.

The tournament was scheduled as a three-day, 54-hole event, but they’ve rescheduled it to a four-day, 72-hole tournament.

The KLPGA Tour will continue its season in Jeju Island at the 14th S-OIL Championship at Elysian Jeju Country Club, starting from June 12 to 14. This tournament will be played as a three-day, 54-hole event, with a field of 120 players.