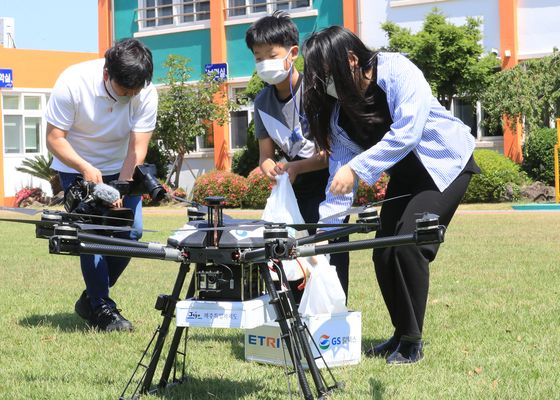 Students from Haeahn Elemenatry School on Jeju Island receive a box of sandwiches and snacks from convenience store GS25 delivered by a drone, on Monday. [YONHAP]

A box of sandwiches and beverages for 127 elementary school students took off from a GS Caltex gas station on Jeju Island on Monday morning. The delivery wasn’t made via road or on any type of wheeled vehicle. It was flown by a drone.

The 1-meter by 1-meter (3-foot by 3-foot) machine flew over 800 meters in five minutes time to complete its mission. Then it returned to its gas station base.

The snacks were purchased remotely on the mobile app for the GS25 convenience store chain. The sandwiches were a current bestseller: the “Idol Ingi” sandwich, which was invented for K-pop stars at the taping location of SBS’s music program “Inkigayo” combines potato salad, crabstick, cabbage and strawberry jam.

Monday’s event was a demonstration of how drones can be used for deliveries in residential areas like mountains and islands. It was part of a four-year, 18-billion-won ($15-million) government project launched in April 2019.

The island’s provincial government said it would embark on regular tests of such drone deliveries once a month starting from August.

Fear of the coronavirus is a new reason to accelerate drone trials.

“Drone delivery is a prominent field in the ‘untact’ technology that has become a social trend amid the Covid-19 pandemic,” the Ministry of Trade, Industry and Energy said in a statement Monday.

“We’re starting off in rural areas with hopes that it would offer a big help to senior citizens and residents living in areas out of reach in terms of logistics and delivery. The plan is to gradually expand the adoption of delivery drones in the future to suburbs, then city centers.”

“Gas stations are built for easy access by vehicles, have plenty of storage room and are located across the country — these are good conditions to make them logistics connection points,” said GS Caltex CEO Hur Sae-hong.

GS Holdings roars back into the black on oil prices