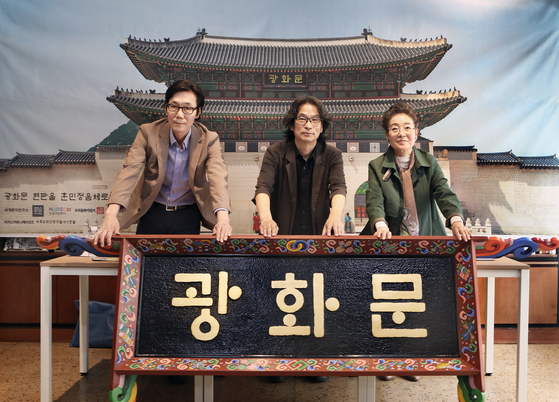 Kang Byung-in, center, and other members of a civic group on hangul, the Korean alphabet of Korea, call for a change to the Gwanghwamun Gate's sign from traditional Chinese to Korean, such as in the example model seen above, during a press conference in central Seoul on May 19. [PARK SANG-MOON]


Famous calligrapher Kang Byung-in and a number of experts on hangul, the Korean alphabet, recently called for replacement of the characters used on the Gwanghwamun Gate from traditional Chinese characters to hangul.

“The Korean language is being embraced even by foreigners these days as there is heightened interest abroad to pick up Korean language skills, yet the Gwanghwamun Gate, the face of Korea, is still sitting in the past, failing to reflect what Korea is today,” Kang said in a press conference in Seoul on May 19 hosted by a civic group co-headed by himself and other experts on calligraphy and hangul.

“If you are a young person in Korea, you would read the sign of Gwanghwamun, as Mun-Hwa-Gwang, because it’s written in the old fashioned way of right to left,” Kang said. “How is this an accurate depiction of what Korea has gone through since its modernization? It is not a true representation of the democratic society of Korea.”

Kang and the civic group co-headed by Han Jae-joon, professor of typography at Seoul Women’s University, emphasized that they are not calling for a revamp of all signs of gates to all palaces in Korea, which are all in traditional Chinese characters.

“We are calling solely for the replacement of the sign of the Gwanghwamun Gate,” Kang said. “That is because the gate, we believe, is a symbolic representation of Korea as a nation. Also, King Sejong (1397-1450) created hangul at Gyeongbok Palace. So it’s only right that the gate to the palace is written in the language that he created.”

Prior to King Sejong's creation of hangul, Chinese characters were used by Koreans to read and write. Sejong created and promulgated hangul in 1443, in an attempt to allow all Koreans, regardless of class, to be literate. As Chinese characters were difficult to learn, knowing how to read and write had created a wide gap between nobles and commoners.

The civic group said they hosted the press conference with hopes to garner more support for their movement, with the intention to have the sign changed by Hangul Day, which falls on Oct. 9 every year in honor of the Korean alphabet.

Changing the Gwanghwamun Gate’s sign from traditional Chinese characters to hangul has been on ongoing debate in Korea for years.

The discussion began in December 2010, according to Cultural Heritage Administration, the government authority on cultural heritage in Korea, when they noticed a crack in the sign.

The palace management bureau of the administration opened up a survey in December 2011 to ask 3,000 citizens aged over 19 whether they would like to see the sign in hangul or in traditional characters.

“We received the results that said 58.7 percent of respondents actually wanted to see the sign in hangul and 41.3 percent wanted to see it in traditional Chinese characters,” the department said in its statement issued on May 13. “But the committees within the administration decided to go with the traditional Chinese characters when remaking the sign, because it is a matter that concerns history and heritage.”

This is not the first time since the gate was rebuilt by Emperor Gojong in 1865 that its sign is being renovated. The gate was bombed during the Korean War (1950-1953). It was rebuilt in 1968 during the Park Chung Hee administration. The sign's characters were written by Park himself.

The renovated sign with traditional Chinese characters, to be the third since Korea's independence, will be installed within the year, according to the administration.

“When we speak of preserving cultural heritage, it means that we keep it as closely intact as possible to the way it was built in the beginning,” the department said. “And the sign for Gwanghwamun Gate when it was rebuilt in 1865 was written in traditional Chinese characters.

“We should not change objects of cultural heritage and history as we see fit according to the changing cultures and values of today,” it added.

The department said, however, that it plans to install special exhibitions on hangul on the palace grounds as part of its Gyeongbok Palace preservation project stretching into 2034. 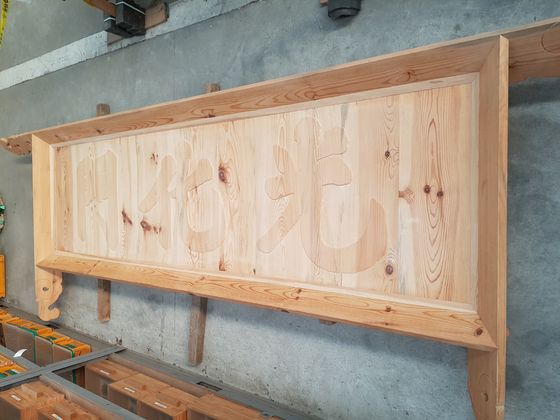 Signboard of the Gwanghwamun Gate being created anew after cracks were found in the current one on the gate in 2010. [CULTURAL HERITAGE ADMINISTRATION]

The civic group said that it will keep trying to change the decision to keep the Chinese characters.

“We understand that the administration has been working on this new sign for the past eight years,” Han said in the press conference. “But this is a matter of utmost importance to the culture and heritage of Korea. There are people who want the sign to be in Korean. We will be opening up discussions on this online as well.”