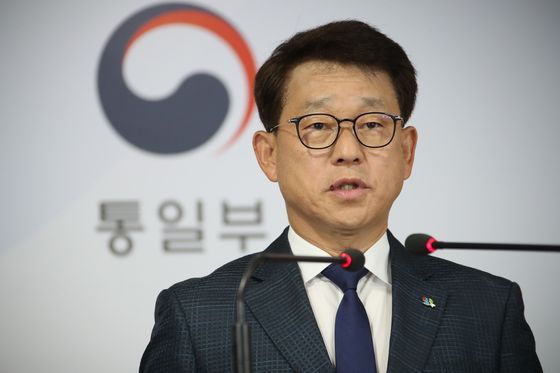 
Confusion reigned in Seoul when North Korea on Monday failed to pick up a liaison call from the South in the morning, then answered a second call in the afternoon, sending a mixed signal as to whether the regime is serious about pulling out of the liaison office in Kaesong.

The failure to pick up South Korea's first call at 9 a.m. marked the first time Pyongyang did not answer one of the twice-daily phone calls between the two Koreas since the inter-Korean liaison office opened in Kaesong in September 2018.

“Our liaison office attempted to contact North Korea as per our regular schedule this morning, but the North did not pick up,” said Ministry of Unification Spokesman Yoh Sang-key in a press briefing Monday.

The ministry later said a North Korean liaison officer picked up a second call made at 5 p.m., but did not reveal why the morning call was not answered.

The initial unresponsiveness fueled speculation that the North may proceed with a threat by Kim Yo-jong — North Korean leader Kim Jong-un’s younger sister — in a statement Thursday slamming Seoul for turning a blind eye to activists sending propaganda leaflets across the border via balloons.

Activists in South Korea, many of them defectors from the North, regularly dispatch balloons carrying propaganda across the border. In April, a civic group sent leaflets announcing that two defectors, including former diplomat Thae Yong-ho, were elected lawmakers in South Korea's April 15 general elections.

Calling the transmission of such propaganda a “wicked act of hostility,” Kim Yo-jong vowed Pyongyang would pull the plug on the liaison office along with already suspended inter-Korean projects like the Kaesong Industrial Complex, Mount Kumgang tours and an inter-Korean military agreement if the South Korean government didn't stop the leaflets.

This was followed up on Friday by another statement from the North’s top inter-Korean agency, the United Front Department (UFD), saying the regime would “definitely withdraw” from the “idling” liaison office, which has been vacant since January due to the coronavirus outbreak.

The latter announcement took the Moon Jae-in administration by surprise, as it had announced legislation banning the distribution of leaflets in response to Kim Yo-jong’s earlier statement Thursday.

The inter-Korean liaison office is the only lasting physical legacy of the first inter-Korean summit at Panmunjom in April 2018 and serves as an official communication channel between two countries technically still at war with one another.

The office was used for a variety of lower level discussions on cooperation between the two Koreas, ranging from topics like forestry, health and sports until North Korea lost its appetite for talks after the breakdown of denuclearization negotiations with the United States at a summit in Hanoi, Vietnam, in February 2019.

A month after the Hanoi fiasco, the North abruptly told the South it was withdrawing all personnel from the office, only to inexplicably return after four days.

This time, however, the threat comes from Kim Jong-un’s own sister and closest confidante, meaning Pyongyang could very well move forward with shuttering the office if Seoul does not comply with the regime’s demands. 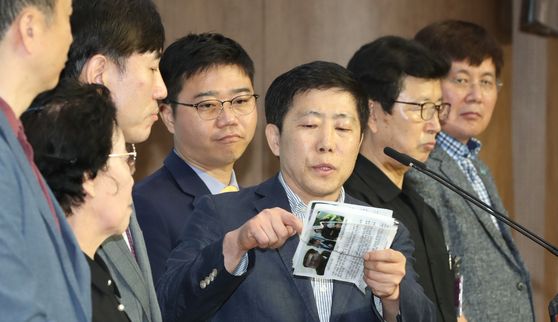 A South Korean right wing civic group leader, third from right, holds up propaganda leaflets his group sent to the North during a press conference with United Future Party lawmakers expressing opposition to a legal ban on the leaflets held at the National Assembly on Monday. [YONHAP]


South Korea’s ruling Democratic Party (DP) is already preparing to meet some of those demands by pushing a bill that would ban the sending of leaflets to the North.

In a meeting at the National Assembly on Monday, DP floor leader Rep. Kim Tae-nyeon stressed North Korea’s intentions should be “interpreted stoically,” while pledging the party would use its supermajority to turn the leaflet ban into law as soon as the legislature completed its committee assignments.

“There have been multiple occasions recently that have provoked North Korea amid a continued stalemate in North Korea-U.S. and inter-Korean relations,” Kim Tae-nyeon said, citing false rumors that circulated last month over Kim Jong-un’s health, some of which were spread by opposition lawmaker-elects like Thae.

“We can no longer ignore the leaflet distribution issue, a problem that every successive administration has had to face.”

The conservative opposition United Future Party voiced fierce opposition to the move. Thae, who took office last month as the first defector to represent a district as a lawmaker in South Korea, wrote on his Facebook page Saturday that the DP was attempting to use its majority to placate Kim Jong-un.