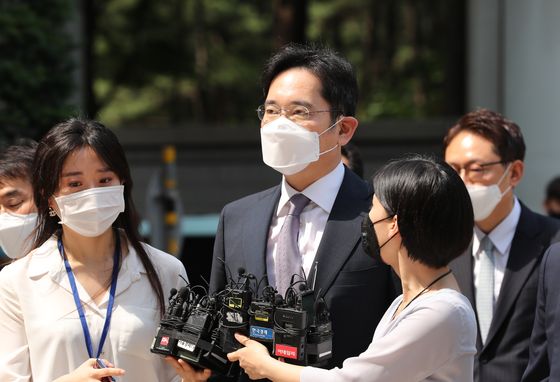 A court will decide late today or tomorrow whether Samsung head honcho Lee Jae-yong will be detained in relation to a probe of a controversial 2015 merger that cemented his control over the conglomerate.

Lee, vice chairman of Samsung Electronics and de facto head of the country's largest business group, appeared for a hearing at the Seoul Central District Court around 10 a.m. and faced a group of reporters. He entered the court building without answering any questions.

Judge Won Jeong-suk presided over the hearing. The decision on whether Lee, Choi and Kim would be detained or not is expected to be made late Monday night or early Tuesday.

If the court grants the prosecutors a warrant, Lee will return to the state detention center after 28 months of freedom.

In February 2017, Lee was detained by an independent counsel team investigating alleged abuse of power and corruption by President Park Geun-hye. At the time, he was detained as a suspect for allegedly offering bribes to Park and her longtime friend Choi Soon-sil in return for political favors to facilitate the 2015 merger.

Through the investigation and after an initial conviction and sentencing to five years in prison, Lee remained behind bars. He was released in February 2018, after the Seoul High Court suspended his sentence. The Supreme Court ordered a retrial in 2019 and the retrial is still ongoing.

After 18 months of a separate but related investigation into the merger, the prosecution questioned Lee twice as a suspect in May. Last week, Lee made a surprise move, filing a petition to the prosecution to convene an outside experts panel to decide the validity of the probe. The Seoul Central District Prosecutors’ Office countered two days later by asking the court to issue warrants to detain Lee, Choi and Kim.

The prosecution sent an eight-member team, led by Senior Prosecutor Lee Bok-hyun, to the hearing on Monday to argue their need to hold Lee.

Lee included Han Seung, a former judge once considered a candidate for the Supreme Court, on his defense team. Han retired from the judiciary after serving as the Jeonju District Court’s chief justice in February. He served on the Seoul High Court from 2016 till 2018 and in other key posts including policy director of the Supreme Court.

Last month, Lee made a rare public apology for the conglomerate’s involvement in the Park scandal. He, however, did not admit to any of the accusations in the current case.

Samsung Electronics issued a statement Sunday asking the press to refrain from making reports based on the premise that Lee is guilty. “The damage imposed on Samsung, its executives and staff members from those reports is not small,” it said.