The final batch of students returned to school Monday, completing a three-week phased reopening of schools as Korea steps into the post-Covid-19 age.

Yet even as fifth, sixth and seventh graders finally began their school year after a three-month delay, anxiety loomed in many parts of the Seoul metropolitan area, where several clusters of coronavirus infections have popped up lately.

The Ministry of Education announced that 517 schools remained closed Monday, almost all in Seoul, Incheon or Gyeonggi, due to fear of infections. The closed schools account for about 2.5 percent of 20,902 nationwide schools.

A Covid-19 case at Wonmook High School in Jungnang District, eastern Seoul, forced at least 12 elementary, middle and high schools nearby to close for a couple of days and go back to online learning. A Wonmook senior tested positive Sunday.

Where the 19-year-old was infected isn't known, but health officials said she and her three friends visited Lotte World, one of Korea’s most popular amusement parks, in Songpa District, southern Seoul, last Friday afternoon after school. Students and school faculty members who visited Lotte World that day were strongly warned by health officials not to go to school Monday and to get tested immediately.

The park shut down Sunday afternoon and said it would reopen Tuesday after thorough disinfection. About 2,000 people are known to have visited Lotte World last Friday, and epidemiologists are currently investigating which rides the infected high school student specifically took.

She and her friends were at the amusement park from 12:13 p.m. to 9 p.m., and the patient took Seoul subway line No. 2 to arrive at Jamsil Station, where Lotte World is located, officials said.

Lotte World said its customer service center received a call from the patient at 10 a.m. on Sunday informing it about her positive Covid-19 test results and the fact that she visited the park on Friday. The park subsequently cross-checked with health officials and stopped selling tickets at 1 p.m. Sunday. Customers who were already inside the park were told to leave and offered refunds.

Her three friends have yet to receive their Covid-19 test results, and some 800 people who have connections with the high school senior, including her family and every teacher and student at her school, are going through a virus test as well.

No one has tested positive yet. Officials said she wore a face mask at Lotte World.

A key concern for health officials at this point is that she was asymptomatic when she visited a Covid-19 testing center last Saturday, which means she may have inadvertently spread the disease. Education officials said she attested not to have felt any symptoms of the virus before or after going to Lotte World, but that she decided to get tested anyway after hearing from a friend that someone had tested positive late last month after visiting Lotte World Mall, which is in the same neighborhood as Lotte World. 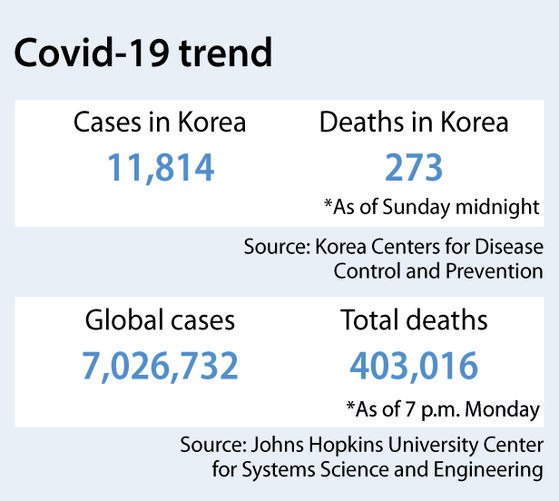 To better track “silent transmitters” like the high school senior, Seoul Mayor Park Won-soon announced plans Monday to provide 1,000 free Covid-19 tests per week at seven designated hospitals in Seoul for anyone who resides in the capital and doesn’t have symptoms of the virus.

Virus tests in Korea normally come with a charge of about 100,000 won ($83) unless the subject has a doctor’s prescription describing possible exposure to the virus, or when health officials determine that the person fits certain criteria to be tested, such as when he or she shows symptoms or had close contact with a Covid-19 patient. Those who get tested without a recommendation of a doctor or health official but still turn out positive also do not have to pay.

Applications for the first set of 1,000 free tests closed within a few hours since Park’s announcement Monday, and the city office said it would start accepting its second set of applications next Monday from 9 a.m.

The Korea Centers for Disease Control and Prevention (KCDC) announced Monday morning that 38 new cases of the coronavirus were detected throughout the nation Sunday, down from 57 on Saturday. Five cases were brought from abroad while the rest were domestic, all from the Seoul metropolitan area: 22 in Seoul, seven in the surrounding province of Gyeonggi and four in Incheon.

Korea’s total case load now stands at 11,814. By Sunday midnight, 273 people had died, the same as the day before, while 10,563 people had been declared fully recovered, up by 11 from the previous day.

Almost all clusters in the Seoul metropolitan area that emerged over the past few weeks grew.

Message in a bottle