Number of moviegoers doubles from a week earlier

Number of moviegoers doubles from a week earlier 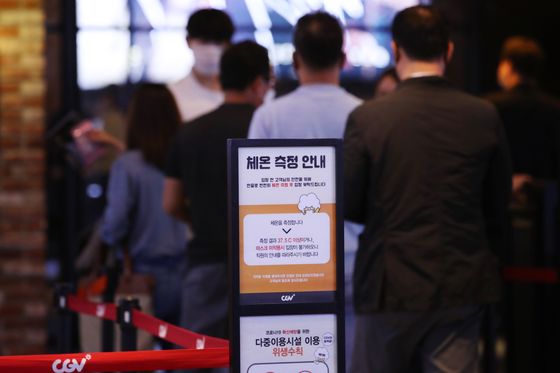 Visitors to CGV Yongsan branch in central Seoul are notified to get their temperatures taken on June 9. [YONHAP]

The number of weekend moviegoers in Korea more than doubled from a week earlier thanks to a government-led discount event, raising hopes for a turnaround for the film industry hit hard by the novel coronavirus pandemic, data showed Tuesday.

The number of moviegoers from Saturday to Sunday reached 316,929, up sharply from the 152,284 tallied a week ago, according to the Korean Film Council (KOFIC).

The sharp on-week increase was attributed to the discount coupon event by KOFIC, as part of the Korean government's 17-billion-won ($13.8 million) fund to support the coronavirus-hit film industry.

Still, the figure for last week represented a meager one-seventh of the tally of 2.35 million from the second week of June 2020.

As people were told to stay at home to prevent the spread of the virus, local movie theaters, including industry leader CJ CGV, have undergone difficult times, while dozens of domestic and foreign films have postponed premieres. The monthly number of moviegoers plunged to a record low in April.

While the country is seeing outbreaks emerge in and around the greater Seoul metropolitan area, the film industry is preparing for the summer peak season, with major films slated to open this summer despite the unfavorable conditions.

Director Yeon Sang-ho's "Peninsula," which was invited to this year's Cannes Film Festival, will be shown in early July. Starring Gang Dong-won and Lee Jung-hyun, the sequel to the smash hit zombie thriller "Train to Busan" (2016) is one of the most anticipated tent poles for the summer.

The upcoming action film "Deliver Us From Evil," by Cannes-invited director Hong Won-chan, will also premiere next month, while the high-budget space opera "Space Sweepers," starring Song Joong-ki and Kim Tae-ri, is also set to be released this summer.