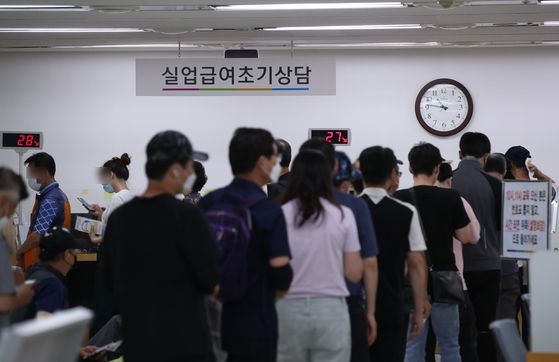 People line up at a job center in Jung District, central Seoul, on Wednesday to attend a presentation on how to apply for unemployment paychecks. [YONHAP]

The number of people employed in Korea has shrunk for a third consecutive month compared to a year ago due to the coronavirus pandemic.


However, fewer people lost their job in May compared to April, which the government sees as a positive sign that the worst has passed.

Despite the cautious optimism, the total number of unemployed people in Korea hit a record high in May.

According to Statistics Korea on Wednesday, 392,000 fewer people were employed in May compared to a year earlier, bringing the total number of employed people to 26.9 million.

This was the third consecutive month that the number of people employed has fallen on year.

The monthly job loss figure was still high, with 476,000 jobs lost from April to May.

“The number of people employed continued to shrink sharply for the third consecutive month since March,” Hong commented on his Facebook post. “My heart was heavy during a meeting [on Wednesday] thinking of the people that are facing difficulty from the shrinking jobs.”

The finance minister, while acknowledging that the job market is struggling, highlighted that May's figures do show a slight improvement.

“Hiring, especially in industries that were most affected by Covid-19 including lodging, restaurants and education, is slowly recovering,” Hong said.

Yet he raised concerns over the increase in the number of jobs lost in the manufacturing industry.

“The coronavirus spread across the world is still critical,” Hong said. “The impact is having a negative influence on the manufacturing industry hiring.”

He also raised worries over the recent resurgence of Covid-19 in the greater Seoul area that started with clubs in Itaewon and has spread to other clusters including in health care facilities and community churches.


Lodging and restaurant jobs also continued to decline, down 183,000 compared to a year ago, the second-largest job loss after wholesale and retail.

But compared to April, this was an improvement, as 212,000 jobs were lost that month.

The only group that saw an increase was those in their 60s or older, as 302,000 jobs were created.


The biggest concern is the growing number of unemployed people who are struggling as companies are currently not hiring amid concerns over the coronavirus pandemic.

Total unemployed in May stood at 1.27 million, 133,000 more than a year ago and the largest number since the current standard was applied in 2000.

The finance minister emphasized the need for swift policy implementation in minimizing the impact of the coronavirus on jobs and requested that the National Assembly quickly approve the third supplementary budget that includes funding key industries that would prevent massive layoffs as well as funding the Korean New Deal that would contribute to creating 550,000 jobs.

“In order to quickly act on the job market situation, which is highly uncertain, the third supplementary budget needs to be confirmed within June,” Hong said.

The government last week announced a 35.3 trillion won supplementary budget, the largest single extra budget ever proposed and the third this year.