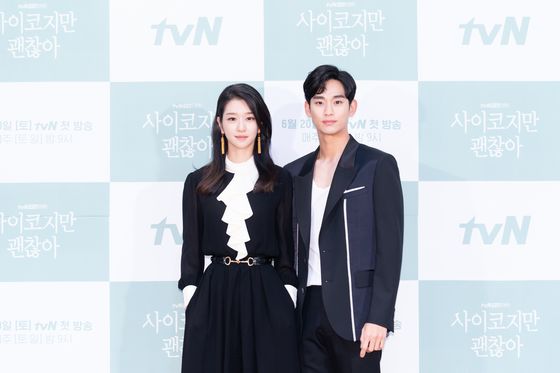 Actors Kim Soo-hyun and Seo Ye-ji pose for a press event for their upcoming tvN drama series "It's Okay to Not Be Okay" on Wednesday. [TVN]


As its title suggests, the goal of the upcoming tvN drama series “It’s Okay to Not Be Okay” is to show it’s O.K. to not be O.K.

“I believe that all of us are crazy in one way or another,” director Park Shin-woo said in an online press event on Wednesday. “Just like the title says, I hope that people can look at themselves and wonder if this [to not be O.K.] is such a problem.”

Even before the series began airing, the news that two stars — Kim Soo-hyun and Seo Ye-ji — were cast as the leads had fans in a frenzy, especially those of Kim who’d waited for his return to the screen ever since he was discharged from his mandatory military service last July.

Until now, however, Kim had only made two cameo appearances in two drama series — “Hotel del Luna” (2019) and “Crash Landing on You” (2019) on tvN — but his short scenes have gone viral online, especially because the actor’s strikingly good looks hadn't diminished over his hiatus.

The drama series marks his official return to the local entertainment industry.

“I completed my military duties rather late compared to others,” Kim said. “But I think it was a good thing for me. It was rather like taking a break, and I think it gave me time to bolster my strength — both in mind and body. Although I may still lack many assets, I became more composed.”

Kim features as Moon Gang-tae, a caretaker in a psychiatric institution who solely supports his autistic older brother Sang-tae (played by actor Oh Jung-se). Seo, his romantic interest, portrays Ko Mun-yeong, the writer of hit children’s fairy tales who has a personality disorder which stems from her traumatic childhood. 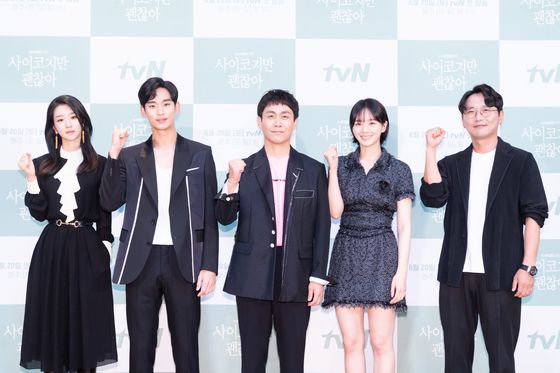 
“Mun-yeong is a self-centered, cold character who feels no empathy toward others,” Seo said, describing her character. “She is highly defensive, and her wall is physically fabricated through her looks. Her accessories, clothes and make-up aren’t for show and tell, but they’re portrayals of self-defense, implying to others that she isn’t a pushover or someone to mess around with.”

For Kim, what drew him to his character was his wounds.

“The immediate attraction was the title,” Kim said. “I also wanted to arouse empathy from the viewers through showing the process of how Gang-tae heals.”

Both Gang-tae and Mun-yeong show antisocial tendencies due to their personal hardships and past, but the story will also cover various other stories through the patients that Gang-tae takes care of.

“That’s one of the attractions of this show,” Kim said. “There will be many kinds of stories and people and I think viewers can follow the narrative of the person that they sympathize the most with, and through that, can hopefully deal with their own wounds.”

According to director Park, the series came to him as a chance for self-reflection.

“We tend to judge others [by our first impressions] and they [our evaluations] rarely ever change,” Park said. “But at the end of the day we [realize] we made mistakes and regret them. What the story is trying to say is just accept people for who they are without putting our judgments on them.”

The series starts on June 20 and will also be available on Netflix.

'It's Okay to Not Be Okay' nominated for International Emmy Awards