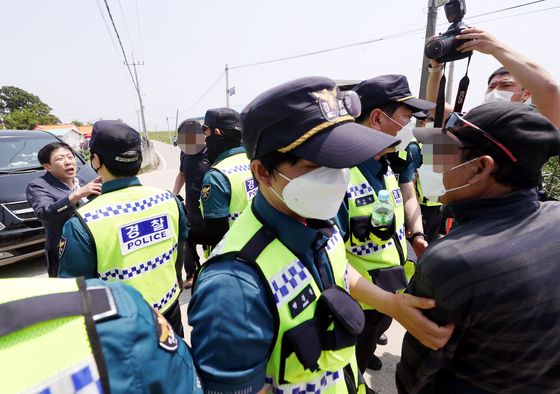 Park Sang-hak, head of Fighters for a Free North Korea, is blocked by local residents and police as the North Korea defector group tries to send rice in water bottles to the North from the coast of Samsan-myeon in Ganghwa County, Incheon, Monday. [YONHAP]

The South Korean government on Wednesday said it will press charges against two North Korean defector groups that recently sent anti-Pyongyang leaflets across the border.

The Ministry of Unification announced that it will file legal complaints against the two North Korean defector-led organizations, Fighters for a Free North Korea and Keun Saem, for violating the Inter-Korean Exchange and Cooperation Act, a day after Pyongyang said it will cut off all inter-Korean communication lines.

The ministry further said that it will take steps to revoke the government-issued permits for the two civic organizations because they endangered the lives and safety of people living at the inter-Korean border and “infringed upon the public interest.”

The ministry cited Article 13 of the related law, which states that any person who intends to "take out goods" are required to obtain approval from the unification minister.

Fighters for a Free North Korea and Keun Saem sent some 500,000 leaflets, U.S. dollar bills and computer memory cards across the border on May 31.

On Monday, the two groups tried to send rice in water bottles to the North by floating them up from the coast of Samsan-myeon in Ganghwa County, Incheon, but their efforts were stopped by local residents.

Park Sang-hak, a North Korean defector from an elite family and pro-democracy activist, is the founder and chairman of Fighters for a Free North Korea, while his younger brother Park Jung-oh heads Keun Saem.

Fighters for a Free North Korea said that it plans to send more anti-Pyongyang leaflets across the border on June 25 to mark the 70th anniversary of the outbreak of the 1950-53 Korean War.