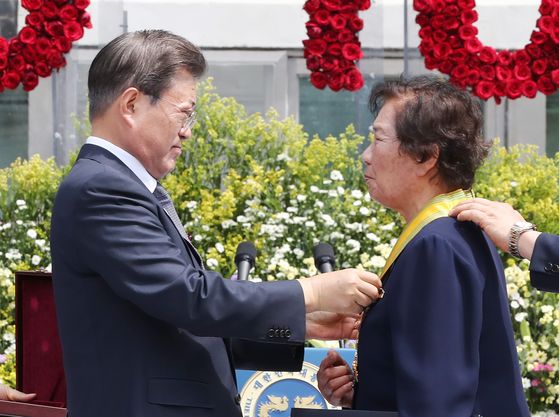 President Moon Jae-in on Wednesday bestowed orders of civil merit on 12 people, including parents of late pro-democracy activists, during an anniversary ceremony for a 1987 uprising against the authoritarian rule of Chun Doo Hwan.

Marking the 33rd anniversary of the June 10 Democratic Protest, the government hosted a commemoration event at a symbolic venue — a former police interrogation facility in central Seoul where many pro-democracy activists were brutally tortured in the 1970s and '80s. The police's National Security Bureau in Namyeong-dong, Yongsan, is in the process of being transformed into the Democracy and Human Rights Memorial Hall.

In January 1987, Park Jong-chul, a student activist from Seoul National University, was tortured to death at the police facility. A JoongAng Ilbo exclusive report revealing that authorities' interrogation techniques included waterboarding — which led to his death — fueled public fury toward the ruling junta. 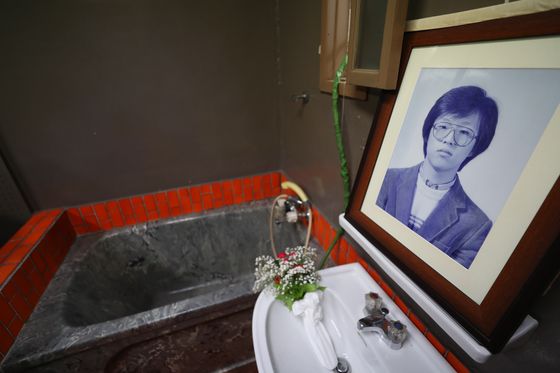 Inside Room 509 of the former police torture facility in Namyeong-dong, Yongsan, central Seoul, a photo of Park Jong-chul, a student activist who died during a police interrogation in January 1987, rests next to the tub used to waterboard him. [YONHAP]

On June 9, Lee Han-yeol, a student at Yonsei University, was critically wounded by a tear gas canister fired by riot police during a campus rally against the cover-up of Park’s death. Lee died on July 5.

Pro-democracy protests led to the June 29 declaration by Roh Tae-woo, a longtime ally of Chun who was designated as his successor, to end the authoritarian system and amend the Constitution to introduce direct elections of presidents.

Roh won the election in December that year to become the country’s first democratically elected president. Since 1987, Korea has maintained the single, five-year presidency.

Eleven others, including the late father of Park, were also posthumously decorated with Moran medals for their sacrifices during the democratization process.

It was the first time the government accepted recommendations from civic groups and conferred the medals to pro-democracy activists and their families, according to the Blue House. The parents of the student activists were honored for spending their lives promoting human rights and democracy, and for bringing attention to the cruelty of the authoritarian regime.

In his speech, Moon, who was a long-practicing human rights lawyer prior to his election, said Korea must continue to improve its democracy in areas beyond its governance system. He said the country must work to develop a sustainable, equal economy.

“Democracy must be more than a system. It should be a part of our lives,” he said. “Democracy at home and the workplace is a more mature form of democracy. When we experience and practice democracy in our daily lives, it will further advance.”

He also drew a line between peace and democracy.

“Peace is a difficult and tough path, but we must accomplish peace through democracy,” he said. “Only that peace will bring about a lasting prosperity to us.”

As part of the event, Moon visited Room 509 of the interrogation facility, where Park died, becoming the first president to do so.

In 2018, Moon announced that the government will build a human rights and democracy museum at the seven-story facility. The project was partially completed and opened to the public, but recently shut down due to the spread of the coronavirus. It is scheduled to be completed in 2022.